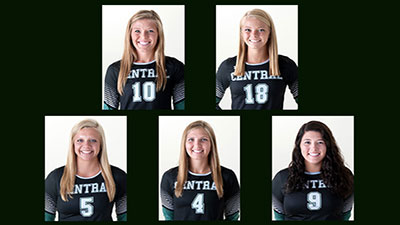 Kortee, Laetsch and Abbe Mancuso (bottom right) were named to the All-Region IX Tournament Team for their play in this past weekend’s Region IX tournament at North Platte Community College.

“Shania was a force for us in the 2018 season,” said CCC head coach Mary Young. “Her size and presence at the net created a lot of our success. Shania has grown a lot in just one season and we are so excited to see how much she will grow in the off-season with continued strength and conditioning.”

Davis, a sophomore setter from Yutan, played in all 39 matches and finished with 176 assists and 464 digs.

“Maddie did a tremendous job this year, starting as a defensive specialist and before moving to libero during the season,” said Young. “I could always count on Maddie’s work ethic, whether it was in practice or matches. Due to injuries, Maddie stepped into a setting role and again was always willing to help our team. She is a champion of character and I’m proud of her tenacity and how she represented our program and herself.”

“Jordee has been a constant contributor for our program for two years,” said Young. “Jordee is an extremely hard worker and is the consummate teammate. We could always count on her to lead by example and deliver in matches. I can’t say enough about her work ethic, attitude and commitment she has given to our program.”

“Without question, Jacie is one of the most competitive players I’ve coached in 24 seasons at CCC,” said Young. “Jacie was a six-rotation player for us and though small in stature, she was mighty in her play.  She could do it all – tremendous ball control and touch on the ball. When you combine that with her work ethic, drive and will to compete, great things happened for us.”

“I’m really proud of the growth we saw in Abbe in the 2018 season,” said Young. Abbe challenged for a starting spot in the lineup and became a real threat for us on offense. She has tremendous room for growth in the spring season and we’re excited to see the remainder of her career at CCC unfold.”