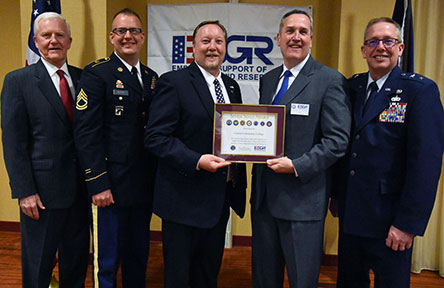 The Nebraska Employer Support of the Guard and Reserve (ESGR) has recognized Central Community College for its support of military employees.

The ESGR presented CCC with its Seven Seals Award during its awards banquet in April. The award recognizes significant individual or organizational achievement or initiative that promotes and supports the ESGR mission.

Jared Pettit, mechatronics instructor at the Kearney Center, nominated CCC for the award. Pettit is a Sgt. 1st Class with the Nebraska National Guard.

“It is great to work for an organization that does its best to take care of employees and students in the manner that CCC does,” said Pettit. “A few times this last year some of our training fell during the semester and I felt that the help and support I received from everybody involved at CCC deserved to be recognized. ESGR gave us an opportunity to do just that and I am proud to be a part of it.”

Bradley Keasling, CCC associate dean of business and skilled and technical sciences, said it is a pure honor to receive the Seven Seals Award for both CCC and Pettit.

“It is an honor to support Mr. Pettit while he serves both our students and our country,” said Keasling. “I appreciate Mr. Pettit’s hard work and Central Community College allowing a culture to be open to support him as he receives requests to serve our country.”