Commencement ceremonies for Central Community College’s Columbus, Grand Island and Hastings campuses were held on May 7, marking the return of in-person graduation exercises. The pandemic forced 2020’s commencement to be an online presentation. The following is a recap of the commencement address given by each campus’ Outstanding Alumni Award recipient. 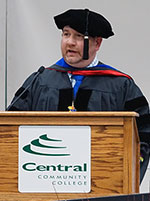 “It’s OK not to have a plan.” That’s the message Charles Sepers, chief public health officer for the East Central District Health Department, had for the 110 CCC-Columbus graduates in attendance. While that might sound like an unusual message for college graduates, it is the conclusion Sepers has come to following numerous altered plans.

At age eight, Sepers said that he wanted to be a scientist. At age 18, he was working as a combine mechanic after missing out on college and the military because of low ambition and direction. He went on to work as an electrical apprentice and a Walmart produce clerk before devising a plan to become a personal trainer after being a part-time CCC student.

“After the first semester, I realized something unexpected – I was addicted to learning,” Sepers explained. “Having been inducted into Phi Theta Kappa, I learned that the satisfaction of doing well academically provided greater reinforcement than anything else I had accomplished to date.”

Sepers dropped his plan of being a personal trainer and planned to become a university professor. While working on his first master’s degree, he realized that his interests were not in teaching and became a graduate research assistant working on things like the Ebola outbreak in Africa and in one of the largest national diabetes treatment centers in the U.S. At long last, he was a scientist and eventually he landed his current position.

Sepers emphasized that not having a plan is different from not planning. Instead, he encouraged the graduates to prepare for, invite and program for opportunity. 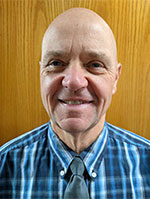 The keynote address was penned by Allan Wade Osburn (pictured) and delivered by Dr. Cheri Beda, CCC alumni director, as Osburn was unable to attend.

Osburn encouraged the 183 graduates in attendance “to be flexible, do your best and be different together.”

Regarding the need to be flexible, Osburn recalled the words of one of his army leaders who told him to be like Gumby amid the ever-changing situations of army life. Knowing that most of the graduates would not know who Gumby is, Osburn explained, “Gumby was a character developed in the 1950s who could twist, fold, flex and stretch to almost four times his original size without breaking.”

As an example, Osburn described the flexibility that was needed during the pandemic and as the country emerges and adjusts.

Having been a Boy Scout leader for more than 25 years, he encouraged the graduates to live the Cub Scout motto, “Do Your Best.”

Osburn closed his address by emphasizing the diversity in everyone. “Embrace the differences in each other, learn from each other and accept everyone for the individuals they are,” Osburn said. 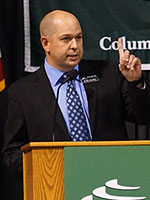 “Just Stand” was the theme of the Hastings Campus commencement address given by Bradley Keasling, associate dean of business at CCC and a 2001 graduate.

Keasling put the theme into action immediately as he had the 144 attending graduates stand, applaud and say “thank you” to everyone in the Heartland Events Center. “These folks have helped make a difference in your educational journey with CCC.”

Drawing on his own experience of standing strong, Keasling detailed his professional life of working many jobs before discovering that his strength is in helping people and being a leader. “Throughout the struggles, challenges and celebrations, ladies and gentlemen, I just stood strong,” Keasling said.

Keasling asked each graduate to think about who has inspired their life, the person who told them to just stand. He said the person who inspired him was a high school dropout who failed many times and always learned from their mistakes.

He then identified the woman as his mother, Brenda, who was in the audience alongside his wife, Katie, and their two daughters.

Keasling closed his remarks by saying, “Do not ever give up. When you fail, I ask you to just stand.”