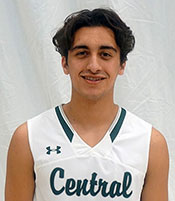 Behrens helped lead CCC to the Region IX title and an appearance in the NJCAA Division II Basketball North Plains District Championship. He started all 31 CCC games and was the third-leading scorer for the Raiders with 15.2 points per game. Behrens recorded three triple-doubles and nine double-doubles throughout the 2019-20 season. He led CCC in assists at 8.8 per outing, with a 2.9 assist-to-turnover ratio. He also led the Raiders with 44 steals.

“I’m really happy for Roman,” said CCC head coach John Ritzdorf. “It’s a tremendous honor to be named All-American and now his name is up there with other great players from across the country. Roman did so much for our team and I’m glad he’s receiving recognition, both regionally and nationally. He deserves it.”

A graduate of Central High School in Omaha, Behrens began his collegiate basketball career at Snow College in Ephraim, Utah. He would like to continue playing at a four-year institution and is considering a few opportunities.

This is the second consecutive year that CCC men’s basketball has produced an All-American as Latrell Talley earned All-America honors last year.