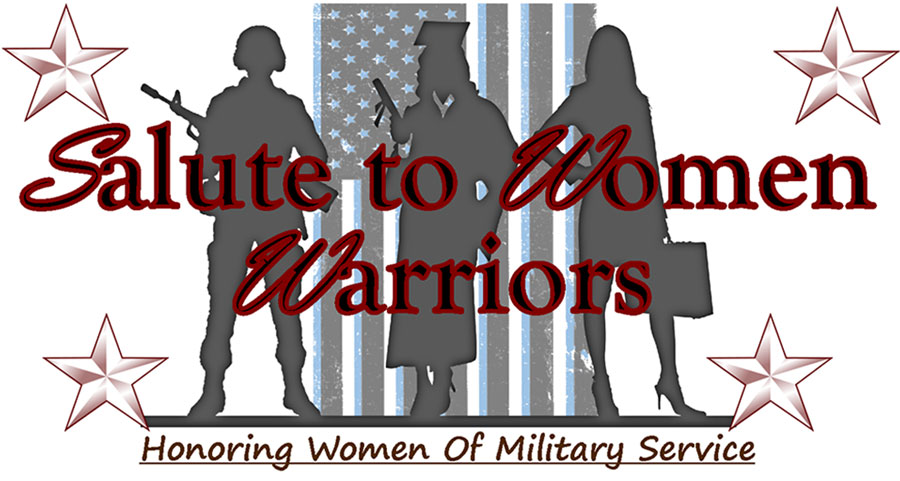 The fifth Salute to Women Warriors Banquet will be held at 6 p.m. on March 28 at Babel’s Barn in Wood River. Doors open at 5:45 p.m.

The banquet is presented by the Central Community College Foundation and the CCC Veterans and Military Resource Center and is open to the public. It is designed to honor past and present women of the U.S. military, raise funds for CCC’s Women Veteran’s Scholarship, and inspire and empower this traditionally underserved population.

The keynote speaker will be Master Sgt. Kelli Hatzenbuehler, who has 22 years of service with two overseas deployments. She serves at the Nebraska National Guard Joint Forces Headquarters and is a mental health therapist at Heartland Equine Therapeutic Riding Academy in Omaha.

The evening also will include dinner, a silent auction, music provided by Jessy Karr and a cash bar service. All proceeds will benefit the Women Veterans Scholarship in Honor of Wilma Kellogg, WWII Army Veteran.

“A great aspect to this event is that local community members are welcome to attend and support our women warriors and their local community college at the same time,” said Travis Karr, veterans and military services director at Central Community College.

Possible ways to support this event include monetary sponsorship; donation of services, supplies, silent auction items or gift certificates; hosting a table for a group; or donating to the CCC Women Veteran’s Scholarship through the CCC Foundation. All donors will receive recognition at varying levels.

Tickets are $25 per person and may be purchased at the Veterans and Military Resource Center at CCC or on the Salute to Women Warriors Facebook page.

The Pathways Scholarship provides two paths to degree completion at Nebraska Wesleyan with financial benefits that include a $15,000 scholarship to every CCC student admitted to NWU’s traditional undergraduate program or a reduced tuition rate of $25 per credit hour to those who enroll in the accelerated bachelor’s degree-completion program for working adults in Lincoln or Omaha.

Since establishing the agreement in 2017, 288 CCC students transferred nearly 6,000 credit hours to NWU while maintaining a 3.4 GPA.

“We’re proud of the opportunity that the Pathways Scholarship has provided to community college students,” said Good. “In addition to providing important financial resources, the program has provided a seamless transition to so many students who have truly excelled academically and graduated with outstanding outcomes.”

She previously had taught for seven years at public schools in the North Platte area. She began in 1977 teaching math and science at a school with kindergarten through the eighth grades. The school was later consolidated into North Platte Public Schools, and Korensky taught at the two junior high schools.

Korensky is a graduate of Kearney High School. She earned bachelor’s and master’s degrees in math education from the University of Nebraska-Kearney.

She is a member of St. George Orthodox Christian Church in Kearney. While working, she was a member of the Nebraska Mathematical Association of Two-Year Colleges (NEBMATYC) and the National Association for Developmental Education.

She has two children, Dan Korensky and Melissa Vodehnal, both of Grand Island, and four grandchildren.

Donna Murphy of Hastings has retired as a nursing adviser at the Grand Island Campus, the position she has held since 2001 when she joined the CCC staff.

She is a graduate of Hastings St. Cecilia High School who went on to earn a bachelor’s degree in nursing from the University of Nebraska Medical Center.

Her prior experience includes employment as a medical-surgical nurse in North Platte. After moving back to Hastings, she worked for a pediatrician, Mary Lanning Healthcare and the Hastings Regional Center. At the center, she worked first with drug and alcohol patients and later with psychiatric patients.

She has two children: Greg Murphy of Harvard and Katie Murphy of Hastings. She also has three grandsons.

She replaces Dr. Eric Jones, who retired as dean of educational services at CCC-Grand Island in 2016 and who is now retiring as TRLS executive director.

Thiem, who lives in Genoa, had served as director of the Genoa Public Library for eight years.

The TRLS works with public and school libraries in northeast Nebraska.  It is one of four nonprofit corporations making up the Nebraska Regional Library Systems. They were established to provide improved library services through the cooperation of all types of libraries and media centers in each region. They also help the Nebraska Library Commission meet its goals on a more localized level.

Services were held Feb. 10 at Our Lady of Lourdes Catholic Church in Ravenna with burial at Mt. Calvary Cemetery in Ravenna. Graveside military honors were provided by the Ravenna V.F.W. Post #5820 and the Nebraska National Guard Funeral Honors Team.

He attended school in Ravenna. After graduating from Ravenna High School in 1959, he  became a dental technician.

In 1966, he was drafted by the U.S. Army and was stationed in Fort Hood, Texas. There he served as a staff sergeant but soon moved to the Army dental school where he made dentures, partials and other dental appliances for returning injured soldiers. After he was honorably discharged in 1968, he started his own lab, Stubbs Dental Lab, where he worked full-time until 1989.

He married Kathleen Tschudin on Feb. 12, 1972, in Ravenna, but they later divorced.

In 1990, he took a position as a dental technician at the Veterans Administration Hospital in Grand Island. There he commuted daily for more than 25 years until his retirement. During that time, he was nominated for the Nebraska Federal Worker of the Year award.

His community involvement included many clubs, organizations and boards. He served as a member of the Kearney Airport Authority Board from 1975 to 1980, board chairman of the Selective Service System from 1980 to 2001.

He was a member for more than 15 years of the Nebraska Safety Center, Knights of Columbus, American Legion, Disabled American Veterans and Nebraska Veterans First Committee. He was a key member of multiple committees to move the state VA home to Kearney.

His ultimate passion was Central Community College. He served on the Board of Governors from 1981 to 1988 and from 1991 to 2008. He returned to the board in 2017 representing District 2, which covers Dawson, Franklin, Furnas, Gosper, Harlan, Kearney and Phelps counties and part of Buffalo County.

Survivors include his wife, Margaret; a son, Jason Stubbs of Kearney; a daughter, Ashley Granger of Lincoln; a brother, Keith Stubbs of Grand Island; a stepson, Matthew Showman of Fayetteville, Ark.; a stepdaughter, Brianne Showman of Gilbert, Ariz.; and seven grandchildren.

He was preceded in death by his parents; a brother, Arly Stubbs; and a sister, Jackie Helleberg.

Horner Lieske McBride and Kuhl Funeral and Cremation Services is in charge of arrangements. Condolences may be left at www.hlmkfuneral.com. Memorials are suggested to the family, to be designated later.

The following employees have completed 25 years of service at Central Community College:

She also is a CCC graduate who earned an associate’s degree in office technology in 1994. While she was attending school, she worked for Service Master cleaning during and after the horse races at Fonner park. She then worked for a Levi Strauss representative, providing secretarial support and counting jeans at J.C. Penney to determine how many needed to be ordered.

Her previous experience also includes working as a nursing assistant at the Edgar Nursing Home and Perkins Pavilion and as a care staff member at the Veterans Home.

Thompson is an avid scrapbooker who belongs to two clubs and attends scrapbooking events at least twice a year. A particular project is Scrap for Jack, a fundraising project started by the grandmother of a boy who had cancer in his eye and, because he is growing, has to have his eye replaced every three years.

She is a new member of the Hastings Berean Bible Church and a graduate of Shickley High School.

She has three children, Melissa Sorensen of Hastings, Tiffany Lofgren of Omaha and Junior Lucas of Grand Island. She also has five grandchildren. Her husband, Larry Thompson, died in 2013.

She served as interim associate dean of the extended learning services division for eight months in 2013.

Watson earned a bachelor’s degree in English from McPherson College in Kansas and a master’s degree in organizational management from Chadron State College.

She is active in community organizations and has served on the boards of the Phelps County Community Foundation and YMCA of the Prairie, chamber and economic development committees. She also is past president of the Holdrege Literacy Council and the Adult and Continuing Education Association of Nebraska. She is currently the president of the Phelps County Extension Board and chair of the Nebraska Global Leadership Taskforce.

Math instructor Melissa Kosch is one of five individuals who will be inducted into the Mount Marty College’s Lancer Athletic Hall of Fame this year.

Kosch began attending Mount Marty College in Yankton, S.D. in 2001 and was a member of the cross country, track and basketball teams.

She graduated in 2005 with many honors and accolades, including five Academic All-American honors. She was the first Lancer female athlete to earn Great Plains Athletic Conference All-Conference honors twice in cross country. During her senior season, she earned All-American honors in track and Honorable Mention All-Conference in basketball and was among the conference leaders in three categories. She finished her career winning two major awards issued by the Mount Marty athletic department – the Female Athlete of the Year and the Champions of Character award.

The inductees were introduced during halftime of the Feb. 1 men’s basketball game at Mount Marty College. A formal induction ceremony is set for June 26.

Carrielynn Peace has resigned from her full-time position as an admissions generalist, but she will remain on staff as a part-time administrative assistant at the Grand Island Campus.

Jesse Taylor has been hired as a recruiting admission technician.

Jeff Buescher has been promoted from groundskeeping supervisor to assistant facilities director.

Marni Danhauer has switched positions from associate dean of extended learning services to grants manager in the administrative office.