Seventy-five graduates participated in the ceremony, which encompassed the Columbus, Grand Island and Hastings campuses. 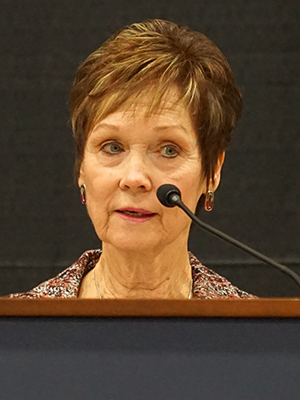 Beth Boesch (pictured), a CCC-Columbus graduate and current member of the CCC Foundation Board of Directors, served as the keynote speaker. She began by detailing her “education safari,” which took 20 years to complete. Raised in Humphrey, Boesch received a scholarship to Benedictine College in Kansas and returned home after one year because she was homesick and in love. She got married, but the idea of education was still lingering.

“Luckily, CCC in Columbus had just opened its doors and accepted the credits I earned at Benedictine,” said Boesch, who began studying journalism. “But finishing college alluded me again. I found out I was expecting. I was close to finishing an associate degree, but I was young, insecure and I let the pregnancy hold me back.”

Some four years later, she got a job in the public relations department at the Nebraska Public Power District (NPPD), which is the state’s largest public utility. Two years later, her departing supervisor wanted her to take his position, but she would have to complete the necessary 12 hours to earn her degree at CCC.

“So I jumped in with both feet,” said Boesch. “While caring for my family, I worked full-time during the day, took classes at night and completed the courses in one semester. I also got the job.”

“I encourage you to be persistent, to overcome adversity,” Boesch told the graduates. “Life can be messy. There will always be stumbling blocks, but don’t let stumbling blocks become roadblocks.”

Boesch also advised the graduates to use their degree as proof of their ability to learn, whether they go on to further their education or join the workforce.

“No matter what position you hold, how smart, motivated and talented you are, there’s always more to learn,” Boesch said.