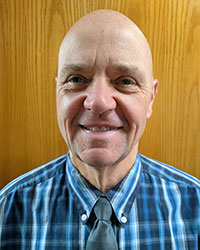 He is a middle school special education teacher at Ravenna Public Schools.

Osburn is an Army veteran who served on active duty for three years and nearly 20 years in the Army Reserves. He has been a volunteer firefighter for more than 30 years, a Boy Scout leader for more than 25 years and is the current commander of Cairo American Legion Post 333.

He and his wife, Amy, have three sons, one daughter and three grandchildren.