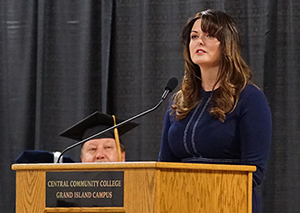 Central Community College held its first winter commencement on Dec. 10 at the Aurora Cooperative Pavilion at the Fonner Park Campus.

Some 90 graduates participated in the commencement ceremony, which encompassed the Columbus, Grand Island and Hastings campuses. In past years, each of the three CCC campuses hosted informal midyear graduation receptions with all participants being invited to take part in spring commencement.

The keynote speaker was Chandra Anderson (pictured), a 2009 graduate of the nursing program at Central Community College-Kearney. She began her remarks by describing her CCC degree as her “golden ticket” and like her, all of the graduates have their own golden tickets.

“It has the ability to get you that job, provide for your family, open the door for you and is the opportunity for you to also to continue your academic journey,” said Anderson, who serves as the chief nursing and quality officer at Cozad Community Health System. “Things made of gold are precious and they should be safeguarded as you have worked so incredibly hard to earn it. Protect your degree at all cost. Be mindful of what is needed to keep your golden ticket fruitful.”

Spectrum, the select choir from the Columbus Campus, performed the national anthem and the ROTC color guard from Grand Island Senior High presented the colors. CCC President Dr. Matt Gotschall conducted the ceremony while each of the three campus presidents played a role. CCC-Grand Island President Dr. Marcie Kemnitz introduced the keynote speaker, CCC-Columbus President Dr. Kathy Fuchser read the names of the graduates and CCC-Hastings President Dr. Jerry Wallace gave a final moment of reflection and encouraged the audience to give a resounding round of applause to the graduates.