“I am honored to be able to recognize these outstanding employees, said College President Dr. Matt Gotschall, who nominated them for the award. “They have used their innovation to make a state or nationally recognized initiative to positively impact our CCC students and communities.”

Michael David of Grand Island, criminal justice instructor at the Grand Island Campus, for demonstrating innovation in the classroom and community engagement. This includes several new courses, job placements and instructional expansion as well as national recognition through the Metallica Scholars program, and the new 2+2 criminal justice agreement with the University of Nebraska-Kearney as part of the Equity Transfer Initiative.

Sherry Desel of Wood River, college Enterprise Systems Services director, for consistently keeping CCC’s database systems updated and leading the collegewide team through a major upgrade from onsite to cloud-based services. She has regularly put in time and effort during evenings, weekends and holidays to update, test and troubleshoot multiple applications that impact all essential personnel, student information and business services.

Randy Manning of Shelton, diesel technology instructor at the Hastings Campus, for playing an instrumental role in creating and providing ongoing support for work-based learning and scholarships for diesel technology students. The innovative partnerships with Nebraska Machinery and other scholarship sponsors have served as a template for other CCC programs. He also has helped with local and state SkillsUSA events.

Jerry Muller of North Bend, industrial technology coordinator and trainer at the Columbus Campus, for his involvement with the Advanced Technological Education Program grant and the National Science Foundation’s first National Center for Next Generation Manufacturing. He also provides support for customized programming in mechatronics and industrial technology with multiple companies across CCC’s service area.

Ben Newton of Grand Island, environmental sustainability director, for leading CCC’s sustainability efforts while serving on several state and national boards and associations. His efforts have resulted in CCC being ranked fourth of all Associate Colleges in the United States, and a silver status through the AASHE. He has led the local effort to get electric charging stations funded and installed at all three campuses and Kearney.

Ronnie O’Brien of Shelton, hospitality management and culinary arts instructor at the Hastings Campus, for dedicating significant time, talent and expertise in building relationships and implementing the nationally recognized Pawnee corn project. She has extended the cultural and historical knowledge of this indigenous tribe in central Nebraska and, in the process, helped the tribe learn more about their heritage.

Keith Vincik of Grand Island, college network and infrastructure services director, for leading the networking and infrastructure team that has prepared CCC to pivot more seamlessly to remote learning and providing work and student support during the initial and ongoing pandemic. Not only did his dedication help all CCC employees, but it also ensured students received technical support and solutions for their continued learning.

Diana Watson of Holdrege, extended learning services regional director and international studies coordinator, has led international education experiences for students, faculty and staff members to such places as Australia, New Zealand and Italy. She represents the college on state boards dedicated to expanding international experiences for community colleges and provides innovative programming through CCC-Holdrege for learners of all ages. 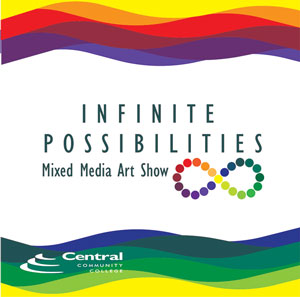 They are Breanna Rocheleau and McKenna Soncksen of Burwell, Stephen Friend of Fairfield, David Onofre and Madison Ripp of Grand Island and Collin Lewis of Hastings.

The event gave them a chance to learn how to mat and frame their artwork, promote a show and host a reception.

Interested individuals may see the art from 8 a.m. to 5 p.m. Mondays through Fridays through March 30 in the Platte Building. There is no entrance fee. 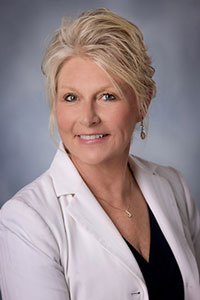 The Central Community College Foundation has announced the appointment of Jeanne Schieffer to its board of directors. Schieffer comes to the CCC Foundation board with a wealth of experience in civic and corporate organizations.

Schieffer most recently served as president of the 750-member Columbus Area Chamber of Commerce from 2019 to 2021. During that time, she managed the chamber through the massive flooding of 2019 and the pandemic in 2020. Since stepping down as chamber president, Schieffer has been working as a communications consultant and a freelance copywriter.

From 1995 to 2019, Schieffer was employed by the Nebraska Public Power District (NPPD), serving in a number of capacities within the corporate communications department. Before managing the department for 10 years, Schieffer was a writer, media representative, advertising specialist, supervisor, change management consultant and project communicator.

“It’s an honor to be a member of the CCC Foundation board,” said Schieffer. “Central Community College is a tremendous asset for Nebraska. I am proud to represent an institution that is economical, professional and trade-focused, and accessible to so many students, whether they are pursuing a college degree or advancing their careers.”

Active in the community, Schieffer serves on the Centro Hispano Board of Directors and is a member of St. Bonaventure Catholic Church. She and her husband, Tim, are the parents of two adult daughters.

“All work and no play makes Jack a dull boy” goes the old proverb.

But six occupational therapy assistant students at Central Community College didn’t mind all the work they did to open the world of play to children with physical or mental difficulties with an inclusive playground at Ryder Park in Grand Island.

The idea began with OTA program director Callie Watson and was adopted in January 2021 as the OTHA 1220 Community Centered class project by Rebecca Dozler of Albion; Bryan Klinginsmith, Maria Reynoso Paiz and Jennifer Sanchez of Grand Island; Sheridan Rieke of Lexington; and Baylie Brewer of Lincoln.

“Nearly one out of every 25 children face some challenge as they learn, play and interact with others,” Watson said. “All children learn, grow and develop through play, improving their physical, cognitive and social skills.”

For children who have different abilities, an inclusive playground removes the barriers that limit their experiences and provides physical, cognitive, social, sensory and communicative elements that enhance their play. These playgrounds provide zones and equipment for children of all ages and abilities to play and interact with their peers, neighbors and family.

“But inclusive playgrounds aren’t just for kids with special needs or handicaps,” Klinginsmith said. “They’re also for adults. Parents in wheelchairs can’t push their children in a swing if the ground is covered in mulch.”

Before Klinginsmith and his fellow students could start thinking about the design of what they hope will become a playground destination, though, they had research to do and official steps to take.

Watson took the first step by calling the Grand Island City Parks and Recreation Department to see if they were interested in CCC students helping to fundraise and create an all-inclusive park.

After securing internal permission for the project, Watson set up a meeting with Dean Moors, executive director of the Central Community College Foundation, and the six students to discuss fundraising.

“Dean was very excited and interested in moving forward,” she said.

This was the true beginning of the journey to turn the park into a reality. The students visited inclusive parks in Hastings, North Platte and York as well as school and public playgrounds in Grand Island. Meetings were held to get the support of people and organizations in Grand Island. Julie Kutilek from Burke Creative Sites in Omaha was hired to develop the design.

“It was quite a learning process, the steps you have to go through to do a project of this size, but we wanted to do it once and do it right,” Klinginsmith said. “It was truly a group effort with everyone’s ideas coming together to make it a reality.”

The plan was presented to and received unanimous approval from the Grand Island City Council in July 2021. The final design has been approved and fundraising is underway with a $1.4 million goal. This will include an endowment to handle maintenance in the years to come.

The 20,000-square-foot accessible park will be the largest of its kind in Nebraska. Just a few of its features are accessible zip lines, swings, slides, and rocking and spinning playground pieces; platforms for slides and other areas to ease the transition from the wheelchair to the equipment; Braille at the bottom of pieces for the visually impaired; and a paved walkway to get from the parking lot to the park.

“This playground will be an asset for the community of Grand Island for years to come,” Watson said. “It is a multigenerational experience and one that parents and children with or without disabilities can benefit from.”

Ryder Park’s location also is a plus, she added. Its nearness to Highway 281 makes it an easy destination, but its central location also puts it within walking and biking distance for many Grand Island residents.

“It’s going to be amazing,” Klinginsmith said of the park, which is slated to open by the end of this fall. “Thousands and thousands of kids will get to play on it for years.”

Once the students completed the course, a steering committee was formed to take over the project, Watson said, but they have continued to participate.

“It has been such a pleasure to see their hard work, passion and everything come together for the betterment of a bigger community,” she said. “Working with different entities has given them a rich experience in communication, professionalism, leadership, creativity, teamwork, time management, adaptability, organization and flexibility.  I’m a very proud instructor.”

Donald Raymond Schneberger, 91, of Shelby died Dec. 27, 2021, at the Butler County Health Care Center in David City. A graveside memorial service will be held this summer at the Shelby Cemetery.

He was born Jan. 31, 1930, in Seward to Raymond and Lydia (Forke) Schneberger. He graduated from Trinidad High School in Colorado and the Reisch College of Auctioneering in Mason City, Iowa. On June 29, 1949, he married Marilyn Jean Schneberger in Garland.

He worked at the Columbus Campus as operations officer from 1974 until his retirement in 1992. He continued auctioneering until 2000. He served in the U.S. Navy from 1947 until 1967 when he retired as a chief petty officer. He worked as livestock sale barn manager and auctioneer in Gridley, Calif.: a data processing manager at an acute care hospital in Oakland, Calif.; and as administrative assistant to the president at Lincoln Technical College in Lincoln.

He was a member of the Duncan and Stromsburg Lions Club, serving as a district governor in 1992 and 1993.

Dubas Funeral Home was in charge of arrangements. Survivors include a sister and two brothers. Condolences may be left at www.dubasfuneralhome.com.

Caitlin Pettman has resigned as Academic Success Center coordinator. She has been replaced by Catherine Bergin, student services administrative assistant.

Kimberly Milovac has shifted positions from areawide early childhood education coordinator to director of student activities and engagement on the Hastings Campus. 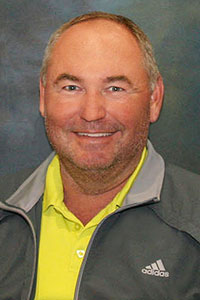 Craig Shaw has completed 25 years of service at CCC. He started work on Jan. 7, 1997, in his current position as an information technology and systems instructor.

He previously worked in the IT department at the Hastings Regional Center and taught part-time for CCC’s extended learning services department in Holdrege.

He is active with the Assessment of Student Learning at CCC and is a Microsoft Certified Trainer.

He and his wife, Katie, have three children and a grandson.

Courtney Brehm has resigned as an accounting clerk and learning center assistant.