Marcus Horwood of Chesham, England, is an exercise physiology and sports management major at the Columbus Campus where he is a member of the PTK Chi Sigma chapter. He also is a member of the Raiders soccer team and is a P.A.S.S. tutor. He’s been named to the President’s List and has received the Athletic Academic Achievement and Exceptional Student in Sociology awards. After graduating in May with an associate of arts degree, he plans to transfer to Midwestern State University in Wichita Falls, Texas.

Alexis Moss of Hastings is a fisheries and wildlife major at the Hastings Campus where she is vice president of scholarship for the PTK Beta Alpha Delta chapter. She has received a regional PTK 5-Star Competitive Edge Award and Distinguished Officer honorable mention, been named to the President’s List and has volunteered for the campus blood drive and Kids Against Hunger project. She will graduate in May with an associate of arts degree and then transfer to the University of Nebraska-Lincoln.

Cassandra Seckel of Columbus is an elementary education major at the Columbus Campus where she is Chi Sigma president. She also is president of the National Society of Leadership and Success, a Student Ambassador, resident assistant, volleyball manager and math lab assistant. She has been named to the President’s Honor List and received the regional PTK Distinguished Officer Award. She will graduate in May with an associate of arts degree and transfer to Peru State College to complete bachelor’s degrees in elementary and special education.

Eli Sidders of Kenesaw is an academic transfer major at the Hastings Campus where he is a member of the PTK Beta Alpha Delta chapter. He has volunteered for the Red Cross blood drive and recently addressed the CCC Foundation Board of Directors about how the scholarship he received has helped him. His future plans include transferring to the University of Nebraska at Kearney to obtain a bachelor’s degree in social work and then working in a rehabilitation center for the blind. 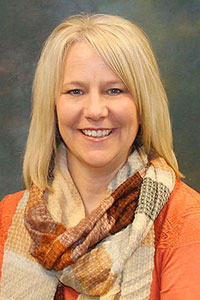 Mary Young, has been awarded the John and Suanne Roueche Excellence Award by the League for Innovation in the Community College. The award honors outstanding contributions and leadership by faculty and staff in member institutions.

She has coached 91 All-Conference players, 79 All-Region performers and 25 All-Americans. Sixty-three of her athletes have earned NJCAA academic awards since 1997.

She just completed terms as a member of the American Volleyball Coaches Association (AVCA) Board of Directors and chair of the AVCA Head Coaches Committee.

She also was instrumental in the legislation that added beach volleyball to the NJCAA as well as AVCA/NJCAA signing a dual partnership agreement for NJCAA volleyball coaches in 2018.

She also was a full-time physical education instructor, but is now shifting into the position of interim athletic director. 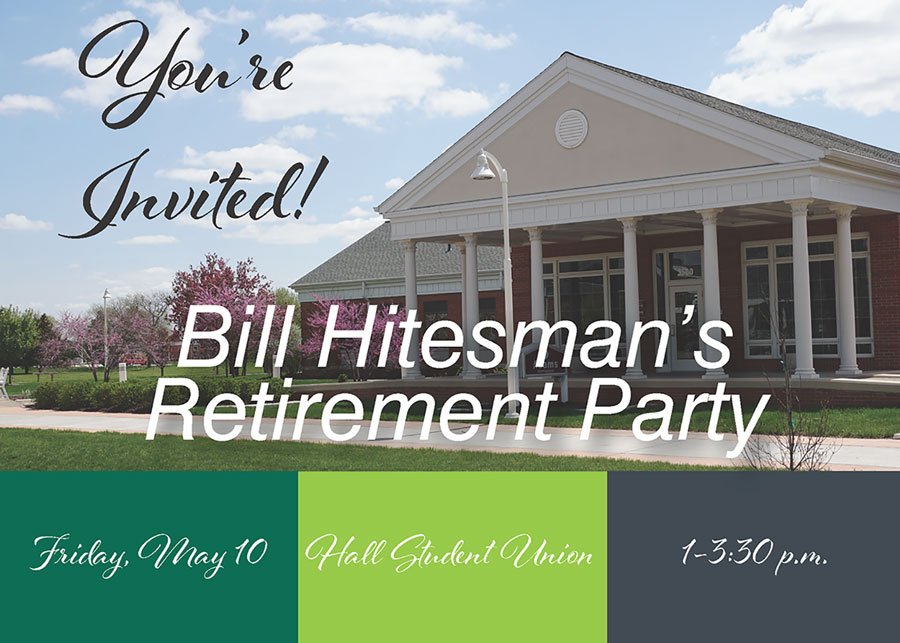 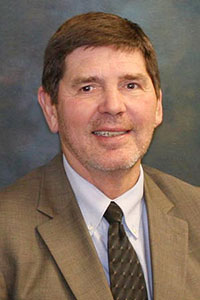 A retirement party for Bill Hitesman, president of Central Community College-Hastings, will be held from 1 to 3:30 p.m. on May 10 in the campus’ Hall Student Union.

Hitesman, who will retire June 3, became CCC-Hastings president in 2002. He also has served as vice president over the skilled and technical sciences and the business and entrepreneurship/incubator divisions.

In recent years, he has overseen the groundbreaking for the Hamilton Building expansion; the installation of an on-campus 1.7-megawatt wind turbine; and the creation of the heavy equipment operator technician, truck driving, diesel technology and energy technology programs.

His 47 years in higher education also includes serving as dean of the Boone campus of Des Moines Area Community College and in various capacities at three other Iowa community colleges. He is the recipient of the Iowa Community College Student Services Association’s Distinguished Service and Dedicated Service awards.

Hitesman and his wife, Jody, have six daughters and 11 grandchildren. 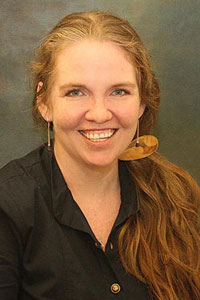 Medallions were presented to the 21 recipients at a luncheon held in their honor during the AACC annual convention April 13-16 in Orlando, Fla.

The AACC established the designation in honor of its former president and CEO as a way to recognize individuals who are making a difference for students, both inside and outside of the classroom.

McDowall joined the CCC staff in 2005 as an English instructor at the Hastings Campus. She later transferred to the Grand Island Campus where she’s also a sponsor for the FOCUS multicultural club.

As a Fulbright Scholar, she spent the 2015-16 academic year in Russia as a lecturer at Moscow Timiryazev Academy.

She is president of the CCC Faculty Senate and a graduate of the college’s Leading with Excellence course.

Central Community College’s commencements will be at 7 p.m. on May 3 in the Physical Education Center at the Columbus Campus, at 10 a.m. on May 4 at the Heartland Events Center for Grand Island Campus graduates and at 3 p.m. on May 4 in the Dawson Building Gymnasium at the Hastings Campus.

The keynote speakers will be: 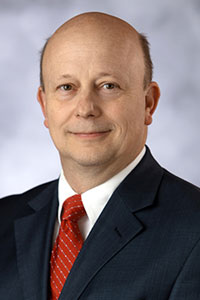 As chief operating officer of the Nebraska Community Foundation (NCF), K.C. Belitz works with NCF staff, volunteers, donors and organizational partners to impact the future of Nebraska He’s based in Columbus but spends part of his time at the Lincoln office and travels regularly to work with Nebraskans across the state.

Belitz is a Columbus native and graduate of Columbus High School and Northeast Missouri State University (now Truman University). He and his wife, Colleen, have a daughter, Emerson, who is a student at the University of Nebraska-Lincoln. 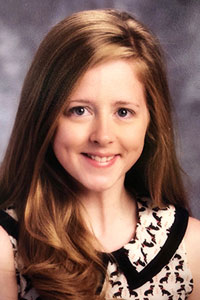 Educator Tracy Jakubowski began her career in Grand Island Public Schools at Walnut Middle School and then was an integration specialist at West Lawn Elementary School before accepting her current position as a history teacher at Grand Island Senior High School.

In 2018, she was honored as the Nebraska History Teacher of the Year by the Nebraska Department of Education and the Gilder Lehrman Institute.

In addition to her CCC degree, Jakubowski holds a bachelor’s degree in education from the University of Nebraska at Kearney and a master’s degree in curriculum and instruction from Doane College. She will complete her educational administration 7-12 endorsement through UNK this fall.

Jaukubowski, a 2007 graduate of CCC-Grand Island, also will be recognized as its 2019 Outstanding Alumni Award recipient. 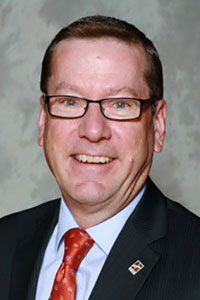 Kautz received the Chamber of Commerce Recognition Award in 1996, the NCSA Distinguished Service Award in 2017 and the Hastings Noon Rotary Club’s Rotarian of the Year Award in 2017.

Services were April 22 at Wyuka Funeral Home in Lincoln and April 23 at the United Methodist Church in Bladen. Burial with military honors was in Eastlawn Cemetery in Bladen.

He graduated from Bladen High School and earned an associate of applied science degree in diesel technology from Southeast Community College in Milford and a bachelor’s degree in business management from Bellevue University. He also held ASE (Automotive Service Excellence) and Hunter Alignment certifications.

He was a U.S. Navy veteran serving from 1961-66. He previously had worked as a mechanic for the John Deere dealership in Shelton and Hastings Motor Truck in Hastings. He also had worked on the big stationary gas pumping engines and fleet vehicles for Kansas-Nebraska Gas in Big Springs.

Johnson was post commander of V.F.W. Post No. 9984 in Bladen for 12 years and was a member of American Legion Post 176 in Blue Hill. He also was active in the United Methodist churches in Shelton and Blue Hill, serving as a Sunday school teacher, youth fellowship leader and usher.

Survivors include his wife of 55 years, LeAnn (Vance) Johnson of Lincoln; two daughters, Renee Sayer of Schuyler and Alicia Cruce of Lincoln; a sister, Jacque Hueftle Stroup of Holdrege; and five grandchildren.

He was preceded in death by his parents; his brother, Stephen; and two grandchildren.

Memorials may be given to the family for a later determination.

Joni Ransom, communications assistant to the college president, has received a first-place award from the National Federation of Press Women for her news story on Math Paths and the Nebraska Math Readiness Project. The story qualified for national competition by placing first in the Nebraska Press Women communications contest. She also received first-place awards at the state level for editing and design of the Community Connection alumni magazine and for a feature story about the partnership between two Hastings Campus programs to make chocolate bars.

Four short plays by Robin Buckallew, biological sciences instructor, have been accepted for the First Flight Festival in Lincoln this summer.

Buckallew’s plays will be part of the youth portion of the festival. They are:

Dental hygiene instructor Cindy Gaskill has been appointed to the Bylaws and Governance Committee for the Central Regional Dental Testing Service. She has been CRDTS DH Team Leader and Examiner for many years and is a current active member of the Nebraska Board of Dentistry.