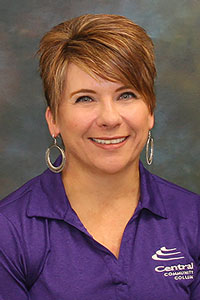 The award recognizes employees who make a significant contribution to CCC. It focuses on service above and beyond what is considered a normal or expected part of the recipient’s job description.

Nominators describe her as a diligent hard worker who gives students the focus and time they need.

“When you meet Denise Kingery, you know you have encountered someone special,” said one nominator. “She has a way of putting others at ease that makes them feel completely safe and taken care of.”

The nominator added she is reliable and the first person to respond to an email, help a student and spend time with anyone who has questions.

“I wish I could give one specific reason why Denise deserves this award, but in truth, it’s because of who she is as a person every day that I believe should be honored,” said another nominator.”

A fellow Leading with Excellence participant said that “Denise’s positivity is contagious. She is a person that people flock to because of her ability to laugh at herself, get through difficult times, and see the light at the end of the tunnel.”

Kingery began work at CCC in 2014 as a part-time OTA administrative assistant and was promoted to her current full-time position in 2019.

She is a graduate of Greeley High School who went on to earn an associate of applied science degree from CCC-Grand Island and a bachelor’s degree from Bellevue University. Both degrees were in business administration.

Prior to joining the CCC staff, Kingery worked as an employment coordinator at Associated Staffing, a health and well-being manager and fitness instructor at the YMCA and a Pension Call Center assistant manager at Principal Financial Group.

She is a member of the Grand Island Leadership Tomorrow Class 17, a youth ministry volunteer at Third City Christian Church and a former board member at St Paul’s Christian Childcare and Preschool.

A Sept. 25 ribbon-cutting ceremony marked the return of the University of Nebraska-Kearney to College Park.

UNK was a partner institution when College Park opened in 1992 until 2003. Thanks to an agreement finalized in September, UNK is now leasing two classrooms and two offices that were previously occupied by Doane University, which ended its partnership with College Park in July. The lease also provides access to the auditorium, meeting room and library/media center.

UNK will work with Central Community College and businesses, high schools and community organizations in the Grand Island area to provide education and training through undergraduate and graduate courses, certificate programs, and workshops and seminars.

Other opportunities may include fine arts performances and community engagement activities.

“I want to go to dental school, but I decided to go into dental hygiene so I could work,” Kort said.

The dual partnership offered a way to shave some time off the years of school required to become a dentist. Since it was a new venture for the university, too, Kort said getting started “was a little rocky,” but once she was directed to the right person, she received a schedule to follow. It meant taking three extra classes a semester.

“I had to spend more time studying and doing assignments than the other students. I designated a day every week to do university homework,” she said. “Time management was important.” 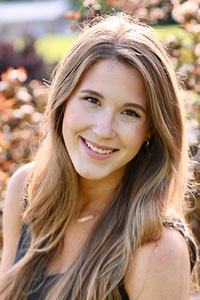 Kort felt fortunate that her dental hygiene instructors were also mentors interested in her future. “I enjoyed my time at CCC and the faculty were a big part of that,” she said. “They keep up with continuing education and the latest trends.”

After graduating in May, she moved to Kansas City where she now works as a full-time dental hygienist at Associates Pediatric Dentistry. “The job is very fast-paced and keeps me on my toes,” she said. “I really enjoy it and I’m learning so much.”

Her learning doesn’t stop with her job, though. She’s also enrolled in an online organic chemistry class in preparation for applying next summer to the University of Missouri in Kansas City.

When asked about how she sees her future, Kort knows what she wants. “I hope to be practicing dentistry for the long term,” she said.

In the here and now, she can take pride in smoothing the way for the second CCC dental hygiene student working her way through the dual program. That student will graduate in May 2021.

The Central Community College Board of Governors has approved the external naming of the $13.1 million Center for Science and Technology on the Columbus Campus.

“We’re honored to contribute to this project which will not only benefit CCC students, but also the local business community,” said CCH president and CEO Mike Hansen. “The center will ensure that area students are well educated and well prepared to enter the workforce in health care or any career in the field of science and technology.”

A groundbreaking ceremony for the Columbus Community Hospital Center for Science and Technology will be held Oct. 22, on the Columbus Campus. Construction is expected to be completed in 2022.

Barry Horner has been promoted from senior systems administrator in the information technology services division to veteran and military services director. He is based on the Grand Island Campus.

Two employees changed positions over the summer, which went unnoted in this newsletter until now. They are Kristina Pearson, from Academic Success Center coordinator to mathematics instructor, and Marie White, from nursing pathway retention coach to nursing instructor.

Linda Lautenschlager has resigned as an assessment technician.

Margaret Treffer has been promoted from registration technician to assistant registrar.

A presentation request by agriculture instructor Dirk Charlson has been accepted by The American Society of Agronomy (ASA), Crop Science Society of America (CSSA) for the virtual ASA-CSSA-SSSA annual meeting Nov. 9-13. His presentation will focus on the role of two-year colleges in ag education.

Nevada Zimniak has joined the staff as a shipping and receiving clerk and building maintenance technician.

She was born May 5, 1922 to Walter and DeEtta (Johnson) Bradley in Kearney. She graduated from Kearney High School and completed nursing training at Mary Lanning in Hastings.

In 1944, she enlisted in the U.S. Army as a registered nurse. She served as a 1st Lieutenant in hospitals in France and Germany. She was discharged in 1945.

She married her high school sweetheart, Warren Paine, on Aug. 14, 1945, in Paris, France. They returned to Kearney where she continued her nursing career as a surgical nurse and private duty nurse.

She was one of the original instructors for the licensed practical nursing program in Kearney. To complement her teaching, she completed a bachelor’s degree in vocational instruction at Kearney State College in 1980. She worked at CCC until her retirement in 1987.

She was a member of First United Methodist Church in Kearney where she was a librarian for many years. She also was a member of the Nebraska Ornithologists Union and National Audubon Society.

Survivors include her sons, Ronald Paine of Colorado Springs, Colo., and Gary Paine of Kearney; her sisters, Jackie Mayberry of St. Paul and Jenny Hartwig of Arlington, Texas; three grandchildren; and four great-grandchildren.

She was preceded in death by her husband; parents; brother, Doty Bradley and sister, Lorene Dobberstein.

O’Brien Straatmann Redinger Funeral and Cremation Services was in charge of arrangements. Memorials may be given to the First United Methodist Church Library. Condolences may be left at www.osrfh.com.