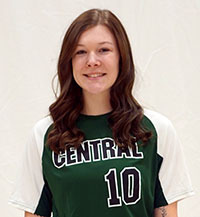 In a double-header at North Platte Community College on April 10, Rother went 7-7 at the plate, driving in five runs and scoring four. She was the winning pitcher in the Raiders 15-6 win over the Knights in the second game, giving up a single run in five innings.

“I felt more relaxed than ever this past weekend at the plate and wasn’t overthinking everything,” said Rother. “Being selected for national player of the week definitely excites me and I feel like it will give me more confidence moving forward.”

Rother played one season for Columbus High School before signing with the Raiders in 2019.

“I am very excited for Larisa,” said CCC head coach Caitlin Simon. “I have talked to Larisa from day one about confidence in realizing her talent. I also believe this will be a huge confidence booster for her. Hopefully, she can carry this into the last part of the season at the plate but even more in the circle.”