One individual, one team and one business were inducted into the Central Community College Athletic Hall of Fame on Nov. 15 at its ninth annual induction ceremony at the Freidhof Building in Columbus. The inductees were: 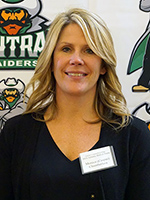 Monica Chamberlain of Sioux City, Iowa, was a standout on the CCC volleyball team in 1997 and 1998, leading the Raiders to a third-place finish in the NJCAA Division I region tournament in the latter year. The Grand Island native was an All-Region IX selection in 1998 and made the Region IX All-Tournament team as a freshman and sophomore. Chamberlain logged 793 kills, 874 digs, 109 blocks and sported a .327 hitting efficiency during her CCC career. She was also named All-NCCAC in 1997 and 1998. 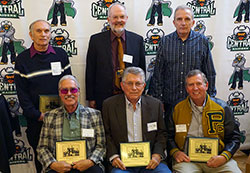 "It was wonderful to work with each one of them and have them on the team," said Suggs at the induction ceremony. "They developed into a good team. I was lucky enough to have these guys on the team." 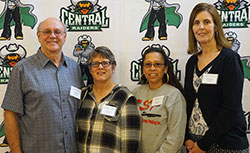 Columbus Screen Printing (CSP) has been a major contributor and supporter of Central Community College athletics for more than 35 years.

According to one nominator: Owners Tom and Jenny Schwank go above and beyond to make sure the CCC teams look the best in Raider apparel with quality designs on team gear. CSP has been a tremendous partner with generous support to Raider fundraisers to assist the needy or special causes such as cancer screenings and awareness.

At the induction ceremony, Jenny Schwank spoke of the great relationships that have been made over the years with the CCC community.

"I've learned about their personal lives, their families, what they like to do, etc.," said Schwank. "Without these types of relationships, we wouldn't have been able to serve the Columbus community for over 30 years."