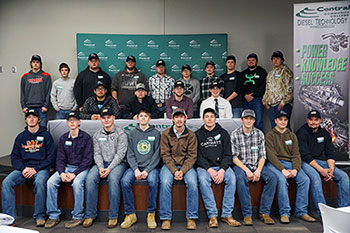 Twenty-three high school students and graduates from across Nebraska signed agreements to enter the Diesel Technology program at Central Community College-Hastings during a ceremony on March 13.

The ceremony was patterned after student-athlete signing ceremonies, complete with families taking part, cameras clicking and CCC baseball caps for each signee. Diesel technology instructors and other CCC administrators were also on hand to give a congratulatory handshake after each signing.

Eleven students signed sponsorship agreements with one of three program partners, which were also present. They include NMC, Titan Machinery, Nebraska Harvest Center and Green Line Equipment. The companies will pay some of the expenses of the sponsored students.

This is the first time that a signing ceremony for a particular CCC program was held and it is hoped that there will be similar events held in the future.

The incoming 2019-20 diesel technology students that took part in the signing ceremony are: