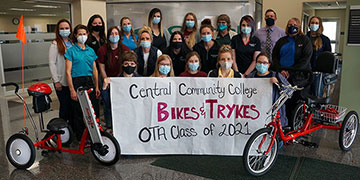 SOTA has raised money for similar donations for several years now. However, fundraising this year was a bit more difficult because of the pandemic. Fortunately, students sold enough T-shirts and Eileen’s cookie dough that in addition to the tricycles, they had enough money remaining to make donations to other charities and get a head start on next year’s drive.

According to the Bikes and Trykes of Central Nebraska website, its mission “is to provide AmTrykes for area children and adults with disabilities who otherwise would not be able to ride a bike or tryke.”

The Grand Island Independent and Local 4/KSNB-TV covered the donation.