More than 400 Central Community College graduates received their degrees during three commencement ceremonies on May 6. Heartland Arena hosted both the Grand Island and Hastings campus graduations while the Raider Fieldhouse hosted the Columbus Campus commencement.

Keynote addresses at the Columbus and Grand Island campuses were respectively delivered by CCC’s Outstanding Alumni Award recipients, Karen P. Pesek and Cody M. Gulbrandson. Troy and Kelsey Hofmann, Hastings Campus alumni award recipients, were recognized at the Hastings Campus graduation while the keynote address was given by Dr. Candace Walton, CCC vice president of innovation and instruction. Here is a recap of each ceremony. 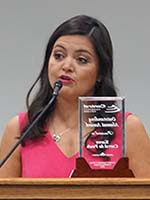 Pesak addressed 94 graduates and shared her story of enrolling at CCC nearly two decades ago as a newly arrived Mexican immigrant with very limited English language skills. However, with hard work and determination she earned a Phi Theta Kappa scholarship and transferred to Wayne State College and earned a public accounting degree, which opened a huge door.

“I got a job offer in my senior year from an international corporation and I found myself jet-setting all over the United States and the world,” said Pesek. “My work sent me to assignments in Spain, Mexico City, New York and Chicago. I was living the dream.”

In 2013, Pesek and her husband, Ross, whom she met at CCC, founded the True Potential Scholarship, which focuses on opportunities for immigrants to pursue an education at any community college in Nebraska. To date, True Potential has granted more than 150 scholarships.

Pesek closed her address by saying, “No matter where you come from and no matter what your goals and dreams are, from here you can go anywhere, and you can do anything. I have seen it. I have done it and I know you can do it, too.” 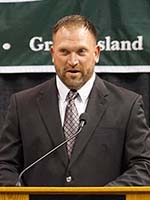 Gulbrandson, a 2000 graduate of Central City High School and a nontraditional student at CCC, went onto earn a doctor of veterinary medicine degree from Iowa State University. Today, he is the owner and veterinarian at Beaver Creek Veterinarian Services in Albion.

“Be yourself, be persistent, be committed, love what you do,” said Gulbrandson. “There is no doubt that with the relationships you have made, the education that you have received and the tuition that you have saved, that you are poised to be successful.”

After the ceremony, Traci Coleman of Grand Island, who earned an occupational therapy assistant degree, said, “I’m super excited. There was a lot of blood, sweat and tears and I’m glad to say that I am finally a gradate.”

Coleman also spoke about spending most of her time at CCC amid the COVID-19 pandemic. “That was an adjustment. I had some classes that got switched to online. There is some stuff that I missed out on, but overall, our teachers did a great job of adjusting and I still feel like I got a really good experience.” 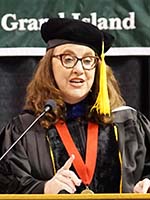 Get back and give back was the theme of Walton’s keynote address, which was delivered to the 133 CCC-Hastings graduates in attendance.

“Eventually, you’re going to have to get back home,” said Walton, who explained that getting back even applied to the students who lived at home during their CCC years. “Your community and your family need your skill set back in your hometown. Please get back to your hometown and make a difference.”

When it comes to giving back, Walton encouraged the graduates to help those who helped them make it to graduation.

“Yes, you did a lot of the work on your own, but some part of your success is because of someone else,” Walton said. “There’s a debt of gratitude to give back to those that supported you. If you don’t have money right now, you have time and you have talent. The collective skills of the graduates can change the world right now.”

The Hofmanns own After Hours Grafix and Urban Chic Boutique in Aurora and both are 2011 graduates of CCC-Hastings. Kelsey earned a business administration degree and an entrepreneurship certificate while Troy graduated with a dual degree in machine tool technology and drafting and design technology.