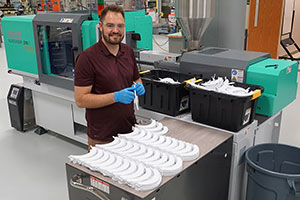 The plastic injection molding program at Central Community College in Nebraska helped meet the demand for personal protective equipment during the COVID pandemic. In particular, there was a great need for headgear pieces for face shields to be produced at a much higher rate than 3D printing. Utilizing on-campus plastic injection molding machines, program director Ben Wilshusen was able to produce 550 pieces of headgear in the same time it took to produce one on a 3D printer.

CCC partnered locally with Jimko Machine for the project as well as Majors Plastics of Omaha. Wilshusen produced the headgear pieces on two machines – the Toyo Si-55-6 (55 ton) and the Arburg Allrounder 370 E golden Electric (55 ton). Both machines were donated on consignment from the manufacturers. The material used to make the headgear pieces was HIPS Regrind, a high-impact polystyrene, which was donated by Majors Plastics. An aluminum MUD mold insert was utilized with the cavity machined by Jimko Machine. The waterline and ejector system was machined on campus by advanced manufacturing design technology coordinator Darin Skipton.

Once the headgear pieces were created, 100 were boxed along with shields, elastic bands and assembly instructions. CCC staffers and even a couple of student-athletes helped pack the boxes, which were then shipped to various health departments in Nebraska. CCC has donated 11,500 completed face shields for use throughout Nebraska and 800 to Columbus Community Hospital, a local facility.

With the assistance of a National Science Foundation grand, CCC’s plastic injection molding program is in development and scheduled to launch in fall 2021.