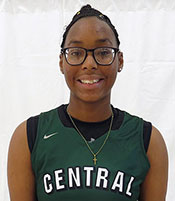 Brooks is the first CCC women’s basketball player to be named an NJCAA All-American.

Brooks helped lead CCC to its first Region IX title in program history and an appearance in the NJCAA Division II Basketball North Plains District Championship. She played in all but one of CCC’s 28 games and started 26. Brooks led the Raiders in points and rebounds with 16.2 points and 9.6 rebounds per contest. She recorded 13 double-doubles, including a stretch of three straight games with double points and rebounds. Defensively, Brooks finished the season with 51 blocks and 51 steals.

“Monica Brooks is one the best players I have coached, both on and off the court,” said CCC head coach Billy Perkins. “She is not only a great player, but a great person and is willing to sacrifice everything for her team. I am so proud of Monica and she has set a standard for future CCC players.”