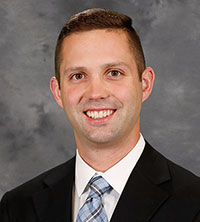 Ritzdorf comes to CCC from the University of Nebraska-Kearney where he has served as an assistant men’s basketball coach since 2016. In his first season, the Lopers went 20-10 and four UNK players were named All-MIAA. The UNK men’s basketball team earned a big victory in the fall 2018 semester as the team posted a 3.14 GPA.

“I am incredibly excited and honored to be the next head coach of men’s basketball at CCC,” said Ritzdorf. “I was born and raised in Nebraska and to have the opportunity to lead a program in my home state is really special to me. I appreciate athletic director Mary Young and President Fuchser for believing in my vision for Raiders basketball and I can’t wait to get started.”

Prior to UNK, Ritzdorf served on men’s basketball staffs at South Dakota-based Northern State University and the University of Nebraska-Omaha, where he earned a degree in education. Ritzdorf also served as an assistant boys basketball coach at Ralston High School and simultaneously coached at the AAU-affiliated Omaha Sports Academy.

“John is a tremendous addition to the CCC men’s basketball coaching staff,” said Young. “His great experience at UNO, UNK and Northern State will bring great energy into our athletic program. We are excited to add Coach Ritzdorf to the Raider family.”

A native of York, Ritzdorf is married to the former Dana Grenfell. He will begin his duties at the Columbus Campus on June 10.