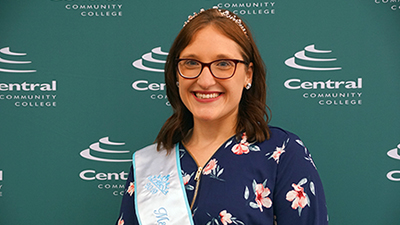 Aubrey Freeze has many roles.  She is a wife and the mother of two children, a CCC-Hastings student and she is Ms. Wheelchair Nebraska.

Freeze assumed the title in March and is the first Ms. Wheelchair Nebraska since 2011. Unlike most pageant winners that win the crown in a competition, she applied for the position, spelled out her platform and her accomplishments and was interviewed by the national board. Freeze was then named Ms. Wheelchair Nebraska.

Up next, Freeze will travel to Little Rock, Ark., for the Ms. Wheelchair America competition during the first week of July. She admits she is nervous because she needs to perfect and memorize her speech and practice her delivery. Freeze is also nervous about the judging workshop each contestant must undergo.

“But I’m really excited overall to go,” said Freeze, whose speech will detail her platform of disability awareness to the public and peer mentoring for those with disabilities. “[My speech] talks about if I were to win Ms. Wheelchair America, how I would want to implement that on a national level instead of a state level.”

Paralyzed in a car wreck at age 17, Freeze is hoping to be an agent of change when it comes to misconceptions. For instance, some believe that people with disabilities can’t have jobs, families or even a normal life.

“I am currently going to school to be a medical coder,” said Freeze. “We can totally have careers, we have normal lives. We might just have to do it a little bit differently than someone who is able-bodied.”

Freeze is also hoping to let people in her situation know that they are not alone.

“I’ve been injured for 10 years, so I felt alone for nine and a half years,” said Freeze. “That’s really depressing because there are tons of people out there that have the same issues as me.”

Freeze found a worldwide community on social media where she visited with people who shared her struggles. Through this platform, she connected with the Ms. Wheelchair Nebraska organization and she was able to go on to earn title.

If Freeze wins the Ms. Wheelchair America crown, she will have to make two appearances each month in various cities around the country.