Grow Our Own – Auto Tech Style 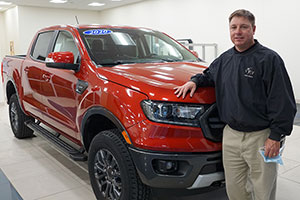 Such could be said about Dan Janssen (pictured), owner of Holdrege-based Janssen Auto Group.

For two years now, Janssen has worked hard to create a program to teach high school students the skills necessary to become automotive technicians. One of Janssen’s friends told him about a program called “Pistons to Pathways,” which began at Southwest Wisconsin Technical College in 2018. Because most high schools do not have the resources to fund auto tech programs, students learn the skills at local auto dealerships. Students are taught by the dealership’s auto techs.

That was the idea. Now came the hard work of bringing the program to Holdrege.

“There were a lot of different pieces,” said Janssen.

Janssen contacted Holdrege Public Schools and Educational Service Unit 11 to gauge the interest and if the dual-credit program could be successful. Central Community College, which has an automotive technology program at the Hastings Campus, provided guidance on early college programming and credentialed one of Janssen’s auto techs to teach the courses, which allows the students to earn college credit. Janssen was able to secure first-year funding for the program from the Phelps County Development Corporation. A generous donation of tools from the Carriage House Foundation was a huge plus.

“Getting all those organizations together and the funding, that’s what took so long,” Janssen explained.

This is the program’s first semester and eight students have enrolled, five from Holdrege High School and three from Wilcox-Hildreth High School. Classes are held at Janssen Ford on Monday and Thursday evenings.

In addition to giving high school students a jumpstart on a potential career in the automotive industry, Janssen also hopes to change the perception of auto techs.

“Unfortunately, in the last 10 to 20 years, the perception of an automotive technician is that they’re dirty, they work with their hands,” said Janssen.

However, he is quick to point out that the highly sophisticated technology involved in today’s car servicing can mean very good earning potential.

“I have several six-figure technicians working for me and people don’t realize that they can earn six figures as an auto technician,” said Janssen.

One of the students in the new automotive technology certificate program is Rylee Hursh, a senior at Wilcox-Hildreth. Before enrolling in the program, Hursh had some experience in working on cars gleaned from helping his grandfather. He said in the past, he was used to tearing down the engine to fix the problem. Now, Hursh has learned that it’s the other way around.

“There’s a lot more computer work and background that you have to learn before you can actually start tearing stuff apart,” said Hursh.

Hursh already has an automotive career path figured out. He is plans to attend a two-year college and then work for a company as an auto tech. Hursh’s ultimate goal is to own his own shop.

Holdrege senior Eric Almazan has been working on cars for most of his life and is considering a career in collision repair. Even so, he took advantage when the offer came along.

“It’s paid for and maybe I’ll learn some new stuff, maybe get more in depth into things,” said Almazan. “I think I’ve just enjoyed it from there and had a lot of fun learning some new stuff.”

Almazan has applied to CCC-Hastings.

“The certificate these students are earning will provide a smooth transition into the automotive technology diploma and degree awards at Central Community College,” said Dr. Nate Allen, dean of skilled and technical sciences. “It also creates a strong foundation for mechanical skills while reinforcing important skills such as critical thinking and problem solving.”