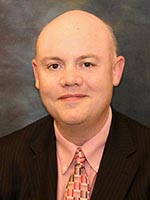 A longtime employee of CCC, Waddle was hired as a history/political science instructor in 2003 and taught at the Hastings Campus for eight years. In 2011, he accepted his current position, vice president of human resources. In this role, Waddle’s areas of responsibility include compliance with regulatory agencies in administering policies and procedures; recruiting and hiring for faculty and staff positions at all CCC locations; managing labor relations and negotiations; and acting as the Equal Employment Opportunity officer.

“I am looking forward to getting back to the Hastings Campus and working directly with our faculty and staff who are doing the essential work of building a highly trained workforce in central Nebraska,” said Waddle. “It is truly an exciting opportunity to work with the Hastings community and our partners in maximizing student and community success.”

Prior to joining CCC, Waddle was an owner/partner of Ericson-based Waddle Enterprises LLC from 2003 to 2009. He oversaw management of the busing contract for Wheeler Central Public Schools. From 1995 to 2003, Waddle was a customer service manager for Walmart stores in Lincoln.

A native of Sterling, Waddle earned an associate of arts degree from Southeast Community College in 1998 followed by a bachelor of science degree from Peru State College two years later. In 2002, he graduated with a Juris Doctorate from the University of Nebraska-Lincoln and was admitted to the Nebraska Bar. Active in the community, Waddle recently concluded an 11-year membership on the Giltner Board of Education. He served on the Nebraska State Education Board of Directors from 2009 to 2012 and the Nebraska Association of School Boards legislative committee from 2017 to 2022.

“Chris understands the proud history of the Hastings Campus while in tune with the innovative programs, facilities and personnel who will make a positive difference for future generations,” said CCC President Dr. Matt Gotschall.

As president of CCC-Hastings, Waddle will be responsible for the overall administration of the campus as well as the skilled and technical sciences and business and entrepreneurship divisions. Waddle is scheduled to assume his duties at the Hastings Campus on June 25.