The end of 2021 also brings an end to Project HELP, but its legacy will live on in the people it shaped.

Project HELP – which stands for Health Education Laddering Program – was the product of a $9.5 million Health Profession Opportunity Grant (HPOG) Central Community College received from the federal Health and Human Services Department in 2010 and was re-awarded as a $12 million grant in 2015. It was designed to educate and train low-income individuals for well-paying, in-demand careers in the health care field.

“The most important aspect of Project HELP was its impact on families and how it changed their lives,” said Becky Fausett, who served as its director. “The Project HELP team was fantastic and worked together so well and cared so much.”

The team worked with students from different backgrounds but who tended to be single female parents ranging in age from their early 20s to mid-30s. Their previous college education was none, some or a class or two.

“Each student had their own barriers,” Fausett said. “Domestic abuse, legal issues, lack of day care, lack of transportation and lack of money for basic school supplies.”

But once they were accepted into Project HELP, they received help with those barriers. Supportive services included personal and career counseling, tutoring, scholarships, laptops, scrubs and stethoscopes, school supplies, gas cards and emergency assistance.

Two services, however, remained beyond CCC’s ability to implement: apprenticeships and child care.

“Apprenticeships and health care don’t mix because you must have a license to work in health care and you can’t get a license until you’ve finished your education,” Fausett said. “Child care providers would have had to be willing to accept state payments, delayed payments and the possibility of being dropped at any time. There were too many hoops to jump.”

Still, CCC was able to provide much of the guidance and help the students needed. And when they overcame their barriers and achieved their goals, their success was celebrated by the entire Project HELP team.

“We would encounter issues and pivot,” Fausett said. “I’m very proud of how hard the team worked to meet each student’s needs while staying within the regulations.”

Project HELP was a success story itself, receiving a second five-year grant in 2015 that allowed CCC to expand the program through partnerships with Mid-Plains, Northeast and Southeast community colleges. The expansion gave Project HELP students at all four institutions more program choices, lab locations and flexibility in reaching their educational goals.

Behlmann said that completing an educational program and getting a good job weren’t the only positive outcomes for Project HELP participants. “They gained confidence. They modeled good behavior for their kids.”

The students’ success reflects CCC’s commitment to Project HELP, which made sure those services were available at all its campuses and centers.

Behlmann has the numbers to prove CCC’s successful management of Project HELP. From 2015 through 2021, 1,710 people enrolled in Project HELP. They completed 1,002 short-term and 368 long-term training sessions, and 1,008 participants entered a health care profession for the first time. Their wages grew on average by $4.66 per hour compared to their income when they started the program.

“We met all our goals,” Fausett said. “More importantly, the feedback we received from participants and employers showed how good Project HELP really was.”

The Aspen Institute has named Central Community College one of the 150 institutions eligible to compete for the $1 million Aspen Prize for Community College Excellence, the nation’s signature recognition of high achievement and performance among America’s community colleges.

The colleges selected for this honor stand out among more than 1,000 community colleges nationwide as having high and improving levels of student success as well as equitable outcomes for Black and Hispanic students and those from lower-income backgrounds.

The 150 colleges have been invited to submit data and narratives as the next steps in an intensive data and practice review process, culminating in the announcement of the prize winner in spring 2023.

“Central Community College is pleased to be recognized nationally as a leader in student success,” said CCC President Dr. Matt Gotschall. “This only comes about due to motivated students and outstanding faculty, staff and administrators who work every day to make that happen.”

The Aspen Prize spotlights exemplary community colleges in order to elevate the sector, drive attention to colleges doing the best work, and discover and share highly effective student success and equity strategies. Since 2010, Aspen has chosen to focus intensively on community colleges.

The Aspen Prize honors colleges with outstanding achievement in five critical areas: teaching and learning, certificate and degree completion, transfer and bachelor’s attainment, workforce success, and equity for students of color and students from low-income backgrounds.

“In an era of persistent inequity and workforce talent gaps, our nation’s best community colleges are stepping up to deliver more degrees to increasingly diverse students, so they are prepared for the good jobs waiting to be filled,” said Josh Wyner, executive director of the Aspen Institute College Excellence Program.

“Leaders of exceptional community colleges understand that achieving excellence requires expanding college access and increasing degree completion, but it doesn’t stop there,” he said. “They are committed to ensuring that all students – including students of color and those from low-income backgrounds – graduate with the skills needed to secure a job with family-sustaining wages or successfully transfer to and graduate from a university. That same commitment stands at the center of the Aspen Prize: to advance the goals of social mobility and equitable talent development.”

The eligible colleges represent the diversity and depth of the community college sector. Located in urban, rural and suburban areas across 34 states, these colleges serve as few as 230 students and as many as 57,000.

CCC environmental sustainability director Ben Newton and students and staff members from the Columbus, Grand Island and Hastings campuses and the Ord Center accepted the award on Nov. 5 in Lincoln.

At the Grand Island Campus, planting started in 2017 with a pollinator garden that continues to expand. It is maintained by students and interns without the use of chemicals and has served as a showcase for the annual pollinator and groundwater festival. Newton and Kazia Marquez, a CCC graduate and part-time sustainability intern from Aurora, were instrumental to its success.

The Hastings Campus began with a plant grant in 2020 and added a Bloom Box planting in 2021. Plants were selected for their ability to attract pollinating insects to the adjacent culinary program vegetable garden and the Pawnee corn garden. It is also chemical-free and maintained by the Students 4 Sustainability club and interns Madison Hajek a University of Nebraska-Kearney student from Odell and William Gordon, a CCC student from Grand Island.

In Columbus, a large pollinator garden was planted by the facilities department and sustainability staff members in 2017. Facilities management director Kim Garretson and College President Dr. Matt Gotschall, who was Columbus Campus president at the time, were instrumental in supporting the project. The garden serves as a research site for a mushroom bee hotel trial planned by a student and funded by UNL Extension and the National Science Foundation.

In Ord, CCC regional director Dr. Crystal Ramm worked with the City of Ord to approve and prepare for a garden located near the hike and bike trail. Ramm maintains the garden and Students 4 Sustainability members have installed three separate Bloom Box gardens as they keep expanding and adding more native plants.

Central Community College is one of the nation’s most environmentally responsible colleges, according to The Princeton Review.

The Princeton Review chose the schools based on a survey of administrators at 835 colleges in 2020-21 about their institutions’ commitments to the environment and sustainability. The editors analyzed more than 25 survey data points to select the schools.

He cited the wind turbine at the Hastings Campus, the Kearney community solar shares program, multiple pollinator gardens, and the solar-powered bike share as examples of CCC’s leadership in sustainability.

“We strongly recommend Central Community College to students who want to study and live at a green college,” said Rob Franek, The Princeton Review’s editor-in-chief.

He noted an increasing level of interest among students in attending college with green practices, programs and offerings. Seventy-eight percent of the more than 11,000 college applicants who participated in The Princeton Review’s 2021 College Hopes and Worries Survey said having information about a college’s commitment to the environment would affect their decision to apply to or attend a school.

The school profiles in The Princeton Review Guide to Green Colleges include “Green Facts” sections detailing such matters as the availability of transportation alternatives on campus and the percentage of the college food budget spent on local/organic food. The profiles also provide information about the schools’ admission requirements, cost, financial aid and student body demographics.

Kevin Julesgard has been promoted from shipping and receiving clerk to post award grant director in the administrative office.

Allison Kleier has joined the staff as a nursing instructor. 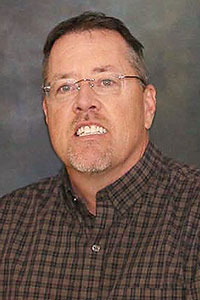 Gene Manhart is retiring at the end of 2021 as a business administration instructor at the Grand Island Campus.

He started work at the campus on a part-time basis in 1989 and was promoted to his full-time position in 1990.

Prior to joining the CCC staff, he worked for seven years at the Nebraska Public Power District as a contract administration specialist.

He was involved with the Grand Island’s Downtown Revitalization Committee for about 10 years and has served on several different entrepreneurship committees, including NetForce.

He has a wife, Rita; two daughters; and a grandson.

Ashley Herringer has joined the staff as a dental hygiene instructor.

Jennifer Swoboda has resigned as a registration assessment technician.