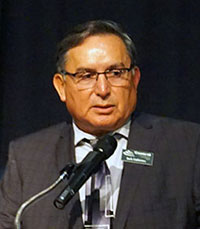 Gutierrez joined CCC on July 1, 1980, as the men’s basketball and golf coach as well as the financial aid director. In 1992, he accepted the role as athletic director and retained his role as men’s basketball coach. Gutierrez led the Raiders to five national tournament appearances, including a fourth place finish at the National Junior Collegiate Athletic Association (NJCAA) Division II tournament. In 1983, the Raiders were the runners-up in the National Little College Athletic Association championship game. He stepped down as men’s basketball coach following the 2006-07 season with a career mark of 418-386.

The next season, Gutierrez started up and became the head coach of the CCC softball program, which he continues to lead. Under his direction, the Raiders won Region IX titles in 2010, 2011, 2014 and 2018.

As athletic director, Gutierrez oversaw the addition of men’s and women’s soccer and softball and the return of golf and women’s basketball. He also established the CCC Athletic Hall of Fame induction ceremonies, implemented all-star games and improved fundraising efforts. Gutierrez also directed facilities improvements such as the remodeling and additions to Raider Fieldhouse and the new soccer and softball fields.

“My 39 years at Central Community College have been rewarding as well as challenging,” said Gutierrez. “Working with 18, 19 and 20 year old college students requires lots of patience and understanding. I am proud to have touched, in some way, every student that I was associated with.”

Gutierrez will officially retire on May 31.

“Jack’s commitment to CCC student athletes has positively affected them both on the field of play and in life,” said CCC-Columbus President Dr. Kathy Fuchser. “His loyalty and dedication to the community is immeasurable.”

Young brings a wealth of leadership experience to her role as interim athletic director, having served in a number of capacities with the NJCAA and Region IX in policy, procedures, sanctions and legislation. She is a past president of the NJCAA Coaches Association and is currently serving as the Region IX women’s director and on the NJCAA Board of Regents. Young recently completed her 24th season as head coach of the CCC volleyball program.

Outside of athletics, Young has served CCC in several capacities over the past two decades including instructor, advisor and admissions director. She began her academic pursuits at the Columbus Campus when it was called Central Community College-Platte Campus, earning her AA in biology before transferring to the University of South Dakota. Young later earned a master’s degree from the University of Nebraska-Omaha.

“I am humbled and excited to continue to work with CCC athletics as the interim athletic director,” said Young. “I look forward to building on the great foundation that has been established at Central Community College and we will continue to offer tremendous opportunities for our student-athletes to develop while on their educational and athletic journey.”

Young will assume her role as interim athletic director on June 1.

“Athletics plays a vital role in the long-range strategic plan for the College and the Columbus Campus, so we are fortunate to have Mary Young on board,” said Fuchser. “We will draw from Mary’s 20-plus years of experience at CCC, both a coach and instructor, along with her connection and insight of the NJCAA to lead Raider Athletics.”