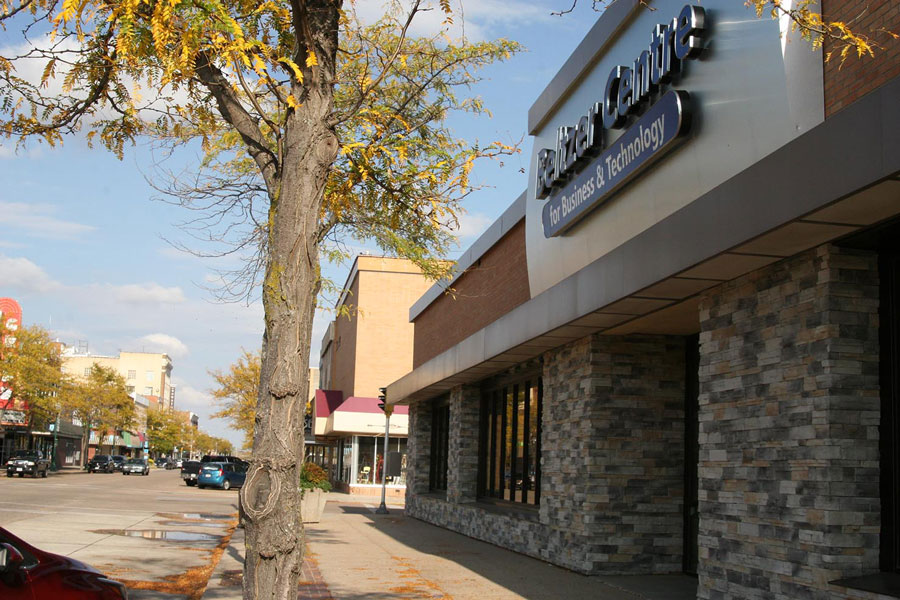 That’s what Central Community College will be doing when the Grand Island Entrepreneurship Center opens its doors in the downtown Beltzer Centre. CCC offered classes in the same location back in the 1980s, but this time it’s taking its services to a whole new level.

“There is nothing like this (the entrepreneurship center) in the Grand Island area,” said Roxann Holliday, dean of business and entrepreneurship. “We didn’t want to replicate or compete with what other people were doing but rather to complement their efforts.”

The conversation about area entrepreneurship needs began in early 2020 with meetings involving business, community and education representatives, but then COVID brought everything to a halt. Fits and starts marked the first part of 2021, Holliday said, until suddenly, things just clicked and started moving fast.

Moving ahead began with a 2,100-square-foot space in the Beltzer Centre that would house a coworking and incubator space.

Holliday agreed. “COVID had many companies transitioning their employees to remote work, and that can be isolating.”

Interaction with other people is only one benefit of coworking. Esch said a major benefit is that the businesses involved share the cost of basic office amenities such as Wi-Fi, printers/copiers and utilities. The Grand Island space also includes a conference room, kitchenette and lounging area, all of which provide flexibility for solo or group work.

“It’s a unique work environment that provides a sense of community and an opportunity for collaboration that otherwise wouldn’t be available to people who are working remotely or don’t have a dedicated office space,” Esch said.

The incubator’s dedicated offices provide access to the same amenities but with a more private environment for people who are just starting a business or expanding a home-based or small business.

Another unique aspect of the new center is the production studio.

“I’m so excited because there’s nothing like this in Grand Island,” Holliday said. “The studio provides a place for people to create podcasts, vlogs, videos and photography.”

The studio is soundproofed and includes necessary equipment such as mics, soundboards, backdrops and lighting. The only thing not provided is a camera.

But the services don’t stop there. Prospective and current business owners also can receive business coaching, and a dedicated individual will oversee the space and help people using it to connect with local resources.

“We want this to be a hub of innovation,” Esch said, “a place where we can help people succeed and grow.”

So when will the center open? Holliday hopes some delayed deliveries will arrive in time for a November opening. Updates are posted on the entrepreneurship center’s Facebook page at https://www.facebook.com/cccentrepreneurshipcenter.

Total enrollment for the 2021 fall semester at Central Community College is 6,056, an increase from 5,695 students at the start of the 2020 fall semester.

The total includes 3,750 distance learning students and 2,306 on-campus students at the Columbus, Grand Island and Hastings campuses and Holdrege, Kearney and Lexington centers. While the enrollment numbers are unduplicated, the campus breakdowns may vary because some students take classes from multiple CCC locations.

The Central Community College Board of Governors has approved an operating budget for 2021-22, which includes a fourth straight decrease in the property tax levy for the 25 counties in its service area.

In addition to local property taxes, other revenues include state aid and tuition as well as sources tied to the bookstores and food services affiliated with CCC.

Total budgeted disbursements and transfers for the college in 2020-21 will exceed $120 million.

Twelve Central Community College-Columbus students were recognized as Project GPS scholars for the 2020-21 and 2021-22 academic years at an Aug. 19 ceremony.

GPS, which stands for Growing Pathways to STEM (science, technology, engineering and mathematics), is a scholarship program sponsored by the National Science Foundation. It targets high-achieving students with financial needs and who represent underserved populations in STEM fields. Project GPS scholars receive two years of educational costs paid in full, including tuition, fees,  room and board. They also have access to experiences that include research, presentations, tours job shadowing and internships.

Central Community College is the only Nebraska community college to be awarded the $648,844 NSF grant to fund the five-year scholarship program.

This Community Builders event will include these shops: Sandhills Clothing Co. and Cottontail Vintage in Clarkson; 143 Vintage  and Backyard Boutique in Leigh; Loveleigh Lane Boutique in Humphrey; and B&M Antiques and Architectural Salvage, Betz’s Little Shoppe and Sixth and Hale in Newman Grove.

Participants can pick up a brochure/map at any of the shops and then collect a sticker for their map at each location. Anyone who visits all the shops will be entered into a drawing for prizes.

Art with an African flair

Dr. Natalie D. Hahn has donated six art pieces to Central Community College in recognition of its faculty leadership and student success. The Polk, Neb., native has worked with United Nations programs for 38 years and is founder of the Malaika Foundation of Nebraska whose mission is global education for Nebraska schools, colleges and universities. The three Mapula embroidery pieces by Stella Mnisi, Seilone Mokone and Selina Ngobeni hang in the Hastings Campus resource center and the three Suri Peoples paintings by Tony Hudson hang in the Grand Island Campus resource center.

There are no items to display.

The following employees have shifted positions: Becky Fausett, from Project HELP director to adult education director, and Mariah Garcia, from administrative assistant to the skilled and technical sciences and business divisions to recruiting admissions technician.

Wendy Keezer has resigned as a nursing instructor.

A celebration of life was held Sept. 30 at the Alda Community Center.

He was born Feb. 24, 1956, in Bismarck, N.D., to Erhart and Dorothy (Kastner) Arndt. He grew up in Grand Island and graduated from Grand Island High School in 1974. He then attended Central Community College where he earned a degree in advance industrial technology.

In 1978, he married Cindy Gilbert in Grand Island.

He taught advanced industrial technology at CCC for 20 years. At the time of his death, he was parts manager for Hansen International Truck where he had worked for 46 years.

He was a member of the NRA and the Grand Island Gun Club.

Survivors include his wife, one son, seven grandchildren and six siblings. He was preceded in death by his parents, a daughter and a granddaughter.

Memorials are suggested to the family for later designation. Condolences may be left at apfelfuneralhome.com.

Services were held Sept. 24 at Apfel Funeral Home in Grand Island with military honors. Burial will take place at a later date in the Brewster Cemetery.

After graduating from Wausa High School in 1962, he served in the U.S. Navy during the Vietnam War. He was honorably discharged in 1967.

He married Caroline Hood on March 15, 1969, at the First Christian Church in Grand Island.

He earned an associate of applied science degree in data processing from CCC-Hastings and a bachelor’s degree in management from Bellevue University.

Survivors include his wife, three children, seven grandchildren,  nine great-grandchildren and a brother. He was preceded in death by his parents, three brothers and two sisters.

Memorials are suggested to the VFW or CCC-Grand Island. Condolences may be left at www.apfelfuneralhome.com.

The book is aimed at middle grade students and focuses on Angus’ Cape Cod adventure with his twin cousins. The trio searches for treasure hidden in 1717 by the pirate Capt. “Black” Sam Bellamy by using the clues in a leather pouch left in the twins’ father’s office. Competing with them is an old sailor named Tarts who wants the treasure all to himself.

Gail Huffman has joined the staff as a custodian.

Sara Stroman has resigned as a Project HELP success coach.