Central Community College has announced that its total college-wide enrollment for the 2018 fall semester is 6,185, which is up from 5,874 students at the start of the 2017 fall semester. The total is an increase of 5 percent and comprises 2,942 on-campus students and 3,243 distance learning students.

While college-wide enrollment numbers are unduplicated, the campus breakdowns may vary due to some students taking classes from multiple campuses and centers.

“We are very pleased that so many students are realizing Central Community College provides a high-quality and affordable education for students seeking immediate workplace skills as well as a place to begin a four-year degree,” said CCC President Dr. Matt Gotschall. “Additionally, our enrollments will continue to grow over the entire semester as we offer an increased number of workshops and customized training programs for individuals and business throughout the year.”

Among Central Community College’s centers, the Kearney Center saw the most significant increase. The on-campus student population stands at 417, while distance learning students total 368. The combined 785 students for the 2018 fall semester is up from 606 for the 2017 fall semester. The increased enrollment comes one year after the opening of the new 63,000-square-foot Kearney Center.

The Central Community College Foundation has met its $5 million funding goal set for the CCC-Hastings Campus Major Gifts Campaign. The achievement comes six months ahead of schedule, which allows groundbreaking for a 32,000-square-foot renovation of the Hamilton Building to take place this fall instead of next spring.

Construction will begin immediately on a 17,000-square-foot addition on the building’s south side for the AMDT program. A 15,000-square-foot renovation of the existing building for the welding technology program will follow in a year.

Of the project’s $10.3 million cost, $5.3 million will come from college reserves with no long-term debt intended.

A concern over students having to pay for expensive textbooks led Dr. Susan McDowall, an English instructor at Central Community College-Grand Island, to do something about it.

She focused on English 1010: English Composition I, a class taken by an average of 1,010 students during the fall semester and 370 students during the spring semester. Reducing textbook costs in this single class would result in thousands of dollars of savings for CCC students.

McDowall believed the best way to reduce those costs was through open educational resources (OER). Her familiarity with OER began with Project Kaleidoscope, a group of eight partner institutions committed to using only OER in its course designs. Not only does the use of OER reduce the cost of textbooks, but it also gives institutions increased control and creativity in changing materials to match student needs and faculty preferences.

So she took a deep breath, dived into the project and made the OER book available as a Google Doc in January so it could be reviewed by fellow English instructors Jim Kosmicki, Grand Island Campus; Chyrel Remmers, Columbus Campus; and the now retired Harry Hamel, Hastings Campus.

“They were able to comment and make changes through March,” McDowall said. “Then I shut the Google Doc down.”

She began transferring the information into Microsoft Word, adding the headings and other items needed to make the textbook accessible and in line with the college’s commitment to universal design.

Jamey Boelhower, former CCC education technology coordinator and integration consultant, took the next step and turned it into a Moodle book.

The result was an OER textbook that became available for the first time this fall, one that is free and searchable in both its PDF and Moodle forms.

McDowall sees only one problem with undertaking the same effort with other textbooks for other classes.

“It took a ton of work to do one textbook for one basic required course, but it will save students in that course thousands and thousands of dollars,” she said. “It’s also sure to help with successful college completion because it means one less barrier to their education.”

Property taxes are based on property valuations for the 25 counties served by CCC, which reported a decrease in total valuation of $325,929,749. 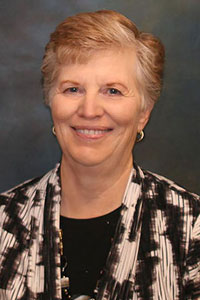 She began full-time work at the college in 1978 as a business administration and math instructor. Two years later she developed the college-wide cooperative education program and became its director on the Columbus Campus. She ran the program until about 10 years ago when she was asked to put more focus on her entrepreneurship efforts, which included working with businesses in the Columbus area and with high school students.

Prior to CCC, she taught business and coached volleyball, girls basketball and boys and girls track for two years at Litchfield High School and three years at Hildreth High School.

She is an active member of St. Isidore Parish and has served on the St. Isidore School and Girl Scout boards.

She and her husband, Norman, operate a family farm. They have two children, Crystral McGinnis of Denham Springs, La., and Gary Lux of Bellwood, and two granddaughters.

The first-ever Pollinator Festival from noon to 5 p.m. on Oct. 13 at Central Community College-Grand Island.

This family-friendly event will feature live music, beekeeping demonstrations, tours of the campus’ pollinator garden, and fun activities for both children and adults. Speakers and vendors will share information about pollinators and the plants that support them, and products will be available for purchase.

Participants may choose from two lecture tracks running simultaneously from 12:30 to 3:30 p.m. A panel discussion on “Where do We Go from Here?” will conclude the afternoon.

Central Community College-Columbus will open the doors of its North Education Center to the public from 5 to 8 p.m. on Oct. 18.

The Manufacturing Day Open House is part of the campus’ celebration of Manufacturing Month in Nebraska and is open to people of all ages. Activities will include a hotdog cookout; refreshments; face painting and other activities for kids; and demonstrations of flying ag drones, huge welding robots and pneumatics. Participants can even get their picture taken with R2-D2, a life-sized model built by CCC students.

The main purpose of the open house, though, is to showcase CCC’s skilled and technical programs, which prepare people for high-demand, high-paying STEM careers in welding, mechatronics, agricultural sciences, business and information technology. Participants will be able to visit with leaders from BD, ADM, Central Confinement, Valmont, Cargill and other area industries about their open positions, future needs and company benefits.

Visitors also will have the chance to enter drawings for gift cards from local companies and for five $100 tuition coupons that can be used at CCC-Columbus in 2019.

For more information, contact Elizabeth Fisher at CCC-Columbus at 402-562-1481 or elizabethfisher@cccneb.edu.

How should a woman celebrate when she turns 30 years old?

If you’re Sara Stroman, the new Project HELP success coach at Central Community College-Hastings, you decide to do something special ... for other people.

On a Facebook post, she asked 30 friends to donate three items to the campus’ Food and Hygiene Pantry, but she got far more than 90 items.

Her family and friends showed their support and generosity by donating more than 350 items.

“I was feeling bad about turning 30 so I decided to do something good,” said Stroman. “It turned out even better than I expected.”

Lauren Slaughter, who held Stroman’s position before becoming CCC’s equity and compliance manager, said the pantry’s shelves “went from dwindling to full to start the pantry off the right way (for the new school year).”

She credited Stroman’s kindness and innovation for this special way to celebrate her birthday. 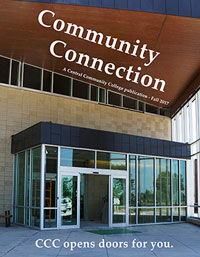 Joni Ransom, communications assistant to the president, received a second place for editing and design in the National Federation of Press Women’s communications contest.

The award was for the redesign of the Fall 2017 Community Connection from a newsletter into a magazine.

The judge commented: “A reader not familiar with Central feels as if the front door has been opened and you are welcome to enter into the college community. One of the most appealing aspects of the layout and overall ‘feel’ is the use of white space. As page counts shrink, it seems as if more text is squeezed onto the page, but this is the opposite. The creative use of white space gives a lighter look and feel to the magazine.”

He married Rita Pease on Jan. 15, 1971, in Grand Island. He worked as a welder at Baasch and Sons Welding of Cairo until retiring in 1995.

He was involved in a variety of emergency medical services (EMS) organizations and activities, including serving as a part-time EMS instructor at the Grand Island Campus for 33 years.

Apfel Funeral Home was in charge of arrangements. Memorials may be given to the Cairo Quick Response Team and the Fire Department. Online condolences may be left at www.apfelfuneralhome.com.

An abstract, “Associate Degree Dental Hygiene Students’ Attitudes Toward Service-Learning,” by Wanda Cloet, dental hygiene program director, was published in the August 2018 issue of the Journal of Dental Hygiene.

Three CCC employees were top finishers in the 36th annual Ram Run and Walk Sept. 8 at the Hastings Campus.

Race proceeds were donated to the CCC Foundation for student scholarships.