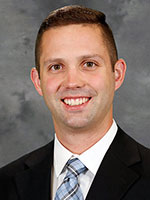 Central Community College men’s basketball coach John Ritzdorf has been named to the 2020 Under Armour 30-Under-30 Team, representing 30 of the most outstanding men’s college basketball coaches under the age of 30.

The National Association of Basketball Coaches (NABC) assembled the team based on nominations from its membership, which totals nearly 5,000 members consisting primarily of university and college men’s basketball coaches.

Ritzdorf is the only community college coach to make the team and is only one of five head coaches on the squad. In 2019-20, he led CCC to a 20-11 record, a Region IX title and an appearance in the NJCAA Division II Basketball North Plains District Championship.

“It’s an honor to be named to the 30-Under-30 Team,” said Ritzdorf. “There are a lot of quality coaches from across the country at all levels of college basketball on the list, so to be mentioned along with them is exciting. Like all individual awards, this would not have happened without my players, assistants and support from the administration here at CCC. This honor belongs to them as much as it does me.”

“We are so proud of Coach Ritzdorf and everything he has accomplished in his initial year as the head men’s basketball coach at Central Community College,” said Mary Young, CCC athletic director. “He worked tirelessly this past season and it paid great dividends for our program. Coach Ritzdorf is a tremendous role model and has made such a positive impact on our student-athletes.”

To see the entire list of coaches and to learn more about the NABC, please click here.