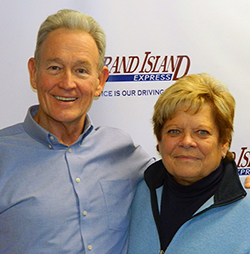 The Grand Island City Council has approved the naming of a $1.5 million multi-generational inclusive playground to be constructed at Ryder Park. Thanks to the generosity of Grand Island business owners Tom and Sue Pirnie, the 27,000-square-foot facility will be known as the “Pirnie Inclusive Playground.” The project was conceptualized by occupational therapy assistant (OTA) program students at Central Community College-Grand Island and a fundraising campaign is being led by a group of community members.

“We are excited to support a project created by CCC students for children of all abilities within Grand Island,” said Tom Pirnie, a member of the CCC Board of Governors since 1994. “Opportunities for area youth and families are vital for the betterment of the community.”

Owners of Grand Island Express and GIX Logistics, the Pirnie family is well known as strong supporters of many community efforts.

“We truly appreciate Tom and Sue Pirnie and others who have pledged their support of this project,” said Cheri Beda, CCC alumni director and community group co-chair. “We are also proud of the OTA students, whose passion drove the inclusive design and led to approval from community leaders and the Grand Island City Council. We are confident that the community will step up to support this inclusive playground and make it a reality for Grand Island.”

According to the U.S. Census Bureau, more than three million children under the age of 18 have some type of disability (physical, auditory, visual, cognitive or ambulatory), meaning nearly one out of every 25 children face some challenge as they learn, play, and interact with others.

“Playgrounds are so important because they offer opportunities for children to benefit from the physical and social developments of play,” said Todd McCoy, Grand Island Parks and Recreation director. “Because of its central location and design that accommodates children with a wide variety of abilities, the new inclusive playground at Ryder Park will no doubt be a popular family destination.”

Fifteen percent of the funds have been raised and the hope is to have the goal met by year’s end. It is anticipated that playground construction will commence in spring 2023. Additional information on the project it can be found here.