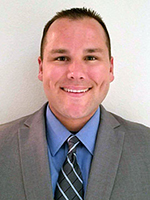 He earned an associate of applied science degree from CCC-Columbus in 2005, graduating with honors. He then transferred to Wayne State College to study criminal justice.