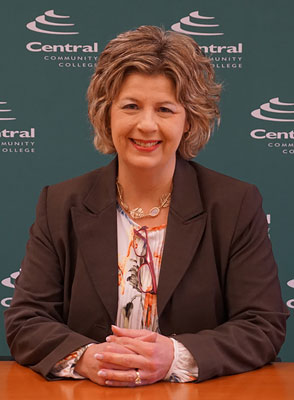 The Central Community College Foundation Board of Directors has appointed Traci Skalberg as the foundation’s new executive director. She will replace Dean Moors, who will retire on Nov. 1.

Skalberg comes to the CCC Foundation from the Grand Island Public Schools Foundation, where she has served as executive director since 2003. During that time, she increased the annual average revenue from $200,000 to $3.5 million; raised, managed and granted $25 million in the last five years; and developed an employee giving program with a 90-percent participation rate. She currently serves as the president of the National Association of Educational Foundations.

Before joining the GIPS Foundation, Skalberg was the director of annual giving for the Stuhr Museum Foundation from 2000 to 2003. She also served as executive director of the Central Plains Chapter of the American Red Cross and as an adult development director for the YWCA of Grand Island.

The 1994 CCC-Columbus academic transfer graduate went on to earn a bachelor’s degree in Spanish and international studies from Doane University in 1997. She is a certified education foundation leader and holds a certificate in fundraising management.

“It has been my passion and mission to inspire investment in education and opportunities for students,” Skalberg said. “I am so excited to expand my work to the counties and communities Central Community College serves.”

She will begin her new duties at the CCC Foundation on Aug. 15, with Moors continuing in a part-time role.

Hanva Bassembat of Columbus is a mechatronics major at the Columbus Campus where he is a member of PTK’s Chi Sigma chapter and a recipient of the Growing Pathways to STEM (Science, Technology, Engineering and Mathematics).  He has been named to the Dean’s List and was selected as the 2021-22 Exceptional Student for Mathematics. He plans to transfer to the University of Kansas, Kansas State University or the University of Nebraska in Lincoln to continue his education.

Jennifer Harris of Imperial was a health information management major at the Hastings Campus. She is currently employed as a Revenue Cycle Consultant at RuralMED. She enjoys reading, crafting and spending time with her grandchildren.

Sara Sudi of Columbus is a business administration major at the Columbus Campus where she is a member of PTK’s Chi Sigma chapter. She plans on transferring to Bellevue University to continue her education. She is a translator of six languages for the public schools and people of her community as well as a volunteer tutor and teacher for non-English speakers. She has been on both the Dean’s and President’s lists at CCC.

Commencement set for May 6

Central Community College will hold commencement ceremonies at its Columbus, Grand Island and Hastings campuses on Friday, May 6.

The keynote speakers will be this year’s Outstanding Alumni Award recipients.

The Columbus Campus commencement will be held at 7 p.m. in the Physical Education Center with Karen P. Pesek of Columbus as the keynote speaker.

The Grand Island City Council has approved the naming of a $1.5 million multi-generational inclusive playground to be constructed at Ryder Park. Thanks to the generosity of Grand Island business owners Tom and Sue Pirnie, the 27,000-square-foot facility will be known as the “Pirnie Inclusive Playground.” The project was conceptualized by occupational therapy assistant (OTA) program students at Central Community College-Grand Island and a fundraising campaign is being led by a group of community members.

“We are excited to support a project created by CCC students for children of all abilities within Grand Island,” said Tom Pirnie, a member of the CCC Board of Governors since 1994. “Opportunities for area youth and families are vital for the betterment of the community.”

Owners of Grand Island Express and GIX Logistics, the Pirnie family is well known as strong supporters of many community efforts.

“We truly appreciate Tom and Sue Pirnie and others who have pledged their support of this project,” said Cheri Beda, CCC alumni director and community group co-chair. “We are also proud of the OTA students, whose passion drove the inclusive design and led to approval from community leaders and the Grand Island City Council.”

Fifteen percent of the funds have been raised and a goal to have the remainder met by year’s end. Construction is expected to begin in spring 2023.

Central Community College athletics is entering the rapidly growing esports arena as the Raiders will field a team beginning in the fall 2022 semester. Unlike CCC’s other sports which are located on the Columbus Campus, the esports team will be open to all students at each CCC location.

Established as an officially sanctioned sport by the National Junior College Athletic Association (NJCAA) in fall 2019, NJCAA Esports has grown from 12 original members to 81. According to the NJCAA, the 81 member institutions are comprised of more than 600 specific teams, more than 150 coaches and administrators and more than 1,500 student-athletes nationwide. The NJCAA provides two-year college esports teams with governance, competition and official national championships.

The head of the new Raiders esports team is Lucas Lumbra, who comes from Ohio State Esports where he was an analyst and manager of the Premier Overwatch team. He guided the team to national rankings and top 16 finishes in 2019 and 2021. In 2018, he founded Buckeye Gaming Collective, a student organization at Ohio State University that provides recreational videogaming and entertainment activities to both students and community members.

Students from the SkillsUSA chapters at Central Community College in Columbus, Grand Island and Hastings placed in state competition April 7-9 at Fonner Park in Grand Island.

Forty-four Central Community College-Hastings students had a hand in building a townhouse in Hastings.

The students came from the construction technology; electrical technology; and heating, air conditioning and refrigeration programs.

The townhouse has two units. Each 3,103-square-foot unit includes two bedrooms, three baths, a laundry room with a washbasin sink and a full basement. Other features include an attached 728-square-foot garage and 83-square-foot deck in the back. The sprinkler system has been installed and seeding has been completed.

Students who worked on the house were:

Services were April 22 at Butler Volland Chapel in Hastings with burial at Parkview Cemetery in Hastings.

She was born July 10, 1952, in Minden to George Jr. and Doris (Fry) Christensen. She graduated from Central Community College with an associate’s degree.

She worked as an administrative assistant for the dean of students at Central Community College-Hastings from 1972 until her retirement in 2017.

Survivors include her husband, daughter, brother, sister and three grandchildren. She was preceded in death by her parents.

Livingston Butler Volland Funeral Home and Cremation Center was in charge of arrangements. Condolences may be left at www.lbvfh.com and memorials may be given to St. Jude Children’s Research Hospital.

He was born on Dec. 10, 1941, to Aldine Verbeck in Kearney and was immediately adopted by William and Edna Ebmeier of Bertrand.

He graduated from Bertrand High School in 1959. He married Susan Holen in 1960, and they had three children.

He worked at radio stations in Lexington, Lincoln, Beatrice and Ord and then taught small market radio broadcasting at Central Community College-Hastings for 15 years.

Survivors include his wife, Beth; two daughters, a brother, three sisters; six grandchildren; and nine great-grandchildren. He was preceded in death by his son and parents.

There was no service. Memorials may be given to the First Baptist Church of Sun Lakes, Designated-Set Free, 9535 E. Riggs Rd., Sun Lakes, AZ 85248.

Alyssa Nickolite is transitioning from executive assistant to the campus president to recruiting coordinator. 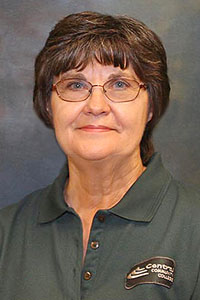 Judy Wurdeman of Columbus has retired from her full-time position as an administrative assistant for the facilities management department.

Prior to joining the CCC staff in 1997, she had worked in a variety of jobs, including as a laundry person at Golden Living and a preloader and driver for UPS. She also made dryer bins at Behlen Manufacturing.

Wurdeman is a graduate of Clarkson High School and was a member of the first class to attend Platte College, the forerunner of CCC-Columbus, in the fall of 1969. She earned a diploma in secretarial science.

She is a member of Immanuel Lutheran Church where she is part of the Altar Guild and helps with communion for the Saturday contemporary service. She is a past member of the church choir and has been a member of the Volunteer Firefighters Auxiliary for more than 25 years.

She and her husband, Roger, have three children and six grandchildren.

Taylor Brase has joined the staff in the areawide position of early childhood education program director.

Maria Flores, recruiting coordinator, has received the 2022 Campus Spirit Award, which annually recognizes an employee who makes a significant contribution to the college, often going above and beyond what is expected of them.

Flores was selected because of the quality assistance she provides to new and current students and fellow employees throughout CCC. In addition to her normal duties, she is heavily involved with the FOCUS group and the Multicultural Resource Center.

Julie Mullen, academic transfer adviser, received the Outstanding Service to Students Award at the 2022 Student Awards Gala. Six employees were nominated by students for the award, and more than 150 students voted on the nominees.

“Julie always goes above and beyond when I need help finding classes or scheduling campus visits for schools I plan to transfer to,” said one nominator. “She’s always ready to help and does a great job explaining everything.”

Warren Shull has resigned as a mathematics instructor.