In 2012, here are some things you didn’t see at Central Community College:

Since then, the addition of these and other measures have demonstrated CCC’s commitment to environmental sustainability. And several of them have played a large role in the college decreasing its overall greenhouse gas emissions by 49.6 percent.

“A part of our Environmental Sustainability Plan is reducing our overall energy use,” said Ben Newton, environmental sustainability director. “This decrease puts us well ahead of schedule for meeting our goals.”

CCC’s initial greenhouse gas inventory was completed in 2013. It gave the college a baseline of 31,613 megatons of CO2 equivalents resulting from commuting and utilities. That number has now dropped to 19,204 megatons of CO2.

“That’s 8 percent per year, which is good,” Newton said. “We’re at 40 percent from where we were in 2013 and we thought we’d only be at 25 percent at this time. We’ve doubled our reduction in emissions.”

“The overall 40 percent reduction will put us at number 13 out of the 83 two-year colleges that have signed either the Presidents’ Climate or Carbon commitment to reduce emissions with Second Nature (an organization committed to taking bold climate action in and through higher education),” Newton said. “We plan to be in the top 10 next year.”

The start in reductions began with the addition of gasoline-electric hybrid vehicles to the college fleet, a small 3.7 kilowatt wind turbine and a 17-kilowatt solar array on the Hastings Campus.

Then came a couple of big projects.

One was the building of the new Kearney Center to LEED (Leadership in Energy and Environmental Design) Silver Standard. LEED is a green building certification program used worldwide. The Kearney Center features daylighting in the hallways, solar tubes in the classrooms and monochromatic windows that react to light. The center also purchases 100 percent of its electricity from the Kearney community solar array project in partnership with Nebraska Public Power District and SoCore Energy.

Another major project was the completion of a 1.7-megawatt wind turbine on the Hastings Campus. The project was the result of a partnership between CCC, Bluestem Energy and the City of Hastings. The wind turbine began operation in January 2017 and is now providing all the electricity the campus needs.

The wind turbine isn’t alone in providing clean energy for the college. Other sources include a 17-kilowatt ground-mounted tracking solar system in Hastings and geothermal systems in Grand Island, Hastings and Kearney.

“Many other energy efficiency projects during 2012 to 2016 helped with the decrease in energy use, too,” Newton said. “Energy efficiency is also the cheapest way to reduce emissions.”

These projects include setting computer screens to go into energy-saving, sleep and hibernation modes after set periods of inactivity; setting back the temperature in buildings during unoccupied times; investing in new boilers, chillers, double-pane windows and spray foam insulation; shifting from fluorescent to LED lights; installing automatic sensors; and increasing the use of videoconferencing.

“We view the emissions inventory based on utility and commuting data every year,” Newton said. “We saw a great overall reduction in 2016-17 due to all the great energy efficiency and renewable energy projects.” 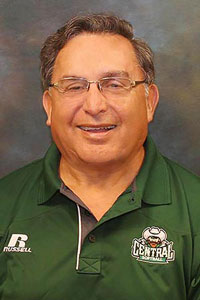 Jack Gutierrez of Columbus started work at CCC on July 1, 1980, as a men’s basketball coach and financial aid director.

He also served as a campus recruiter before taking on duties as athletic director, men’s basketball coach and a physical education instructor. In 2007, he started the CCC softball team and switched from basketball coach to softball coach.

Prior to joining the CCC-Columbus staff, he was a teacher and coach at St. Anne’s High School in Lexington.

In addition to his duties at CCC, he served as head coach of the Columbus High School softball team.

Gutierrez and his wife, Kelly, live in Columbus. He has three children, Drew, Jake and Jaisa, and a granddaughter. 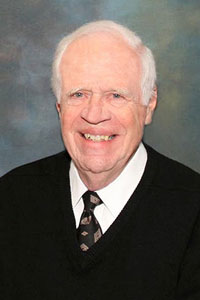 Don Hulme of Hastings came to the Hastings Campus in the fall of 2003, as a math instructor.  After three years, he assumed responsibility for the Small Business Institute and Incubator.

Prior to joining the CCC staff, he was the plant manager at Thermo-King in Hastings. 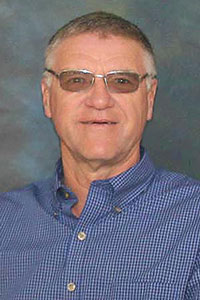 Larry Hummel of Grand Island joined the CCC staff as an adjunct instructor teaching night classes. After he retired from Central City High School, he taught one year of day-time classes before being hired as a full-time mathematics instructor in 2012.

His teaching career began in 1971 at Washington High School. He was employed there for four years before moving to Central City where he taught at the high school for 36 years.

He earned a bachelor’s degree in education from Kearney State College and a master’s degree from the University of Nebraska-Lincoln.

He and his wife, Denise, have been married for 48 years. They have two children, Paul Hummel of Lincoln and Amanda Julesgard of Grand Island. They also have two granddaughters. 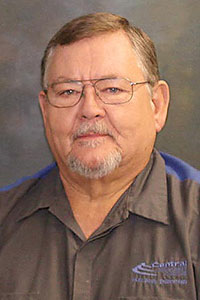 Terry Labenz of Hastings has been an auto body technology instructor at the Hastings Campus since 1997. He taught classes one night a week until 2001 when he was promoted to a full-time position.

Prior to joining the CCC staff, he worked at S & H Truck shop and Hastings Motor Truck (now Nebraska Truck Center) for 29 years as the lead painter.

Labenz graduated from Spalding Academy in 1971 and earned an associate of applied science degree in auto body from Central Community College in 1974.

He is a member of St. Michael’s Church and has coached baseball, softball and soccer.

He and his wife, Deb, have been married 41 years and have three children: Shane; Tracy and Terra. 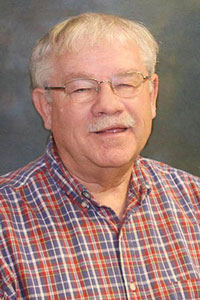 Kim Richman of Hastings has been a chemistry instructor at the Hastings Campus for 14 years.

Richman graduated from Dakota State College in South Dakota with a bachelor’s degree in chemistry and from the University of Nebraska-Kearney with a master’s degree in instructional technology.

He has fond memories of seeing former students now leading productive lives and careers which has always been his goal – to prepare students for the roads ahead no matter where they lead.  He was fortunate to be a coach with different state championship teams.

He and his wife, Linda, have two sons and four grandchildren. They look forward to relaxing on an acreage west of Yankton, S.D., traveling, and having a schedule not set by a school calendar. 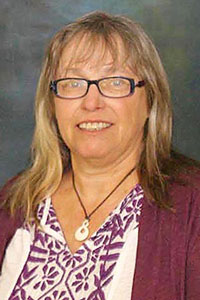 Terry Schifferns of Gibbon started work at the Grand Island Campus in 1994 as an adjunct English instructor and became a full-time instructor in 1995.

She previously was a graduate assistant at the University of Nebraska-Kearney where she earned bachelor’s and master’s degrees in education and English.

Schifferns is a volunteer for the Adult Service Corps, participates in several writing groups and is a member of Nebraskans for Peace. She also is a sponsor of the CCC-Grand Island multicultural club.

She has three children: CJ Schifferns of Roseburg, Ore.; Jesse Schifferns of Omaha; and Megan Miller of Cairo. She also has an adopted son, Chance Sanders. 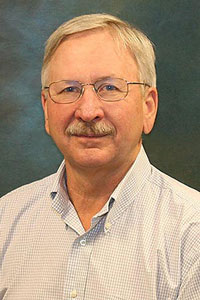 He previously worked as a welder at Schwitz Dairy Equipment in Fullerton and Nebraska Public Power District’s Cooper Nuclear Station in Brownville and as a welding lab assistant at Central Community College-Hastings. A position with Holbart Brothers, which is based in Troy, Ohio, took him all over the country as well as to Korea, Costa Rica, Ecuador, Venezuela and the Philippines.

Senff graduated in 1972 with an associate of applied science degree in welding technology from CCC-Hastings.

He has two daughters, Cierra of Columbus and Chayla of Omaha, and two grandsons. 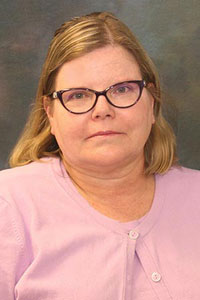 Ann Thorndike of Grand Island joined the Hastings Campus as a medical laboratory technician instructor in 2006.

She had previously worked at St. Francis Medical Center in the laboratory for 31 years. She taught microbiology to the MLS students on clinical rotations from the University of Nebraska Medical Center. She enjoyed teaching so much that when an opening at CCC for a second MLT instructor opened up she applied for the job.  She loves being with her students and finds much joy in getting them ready to go out and become successful health professionals.

She has twin god-daughters: Leslie, a civil engineer working at Offutt, and Laura, who has a degree in environmental health and will be attending Creighton Law School in the fall.

Thorndike’s retirement plans include becoming more active in her PEO chapter and church. She also would like to try her hand at writing a book. 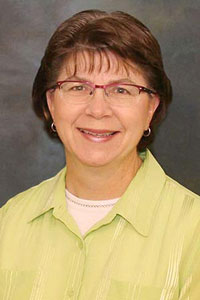 She started work on June 7, 1994, as an administrative assistant in the extended learning services department. Although her duties have changed over the years, she still performs the function for which she was originally hired: designing the catalog that features community education and other ELS classes. Her current duties also include assisting the community education coordinator, working with distance learning and creating ads and brochures.

Prior to joining the CCC staff, she worked for a temp agency and then at KOLN-KGIN TV in Grand Island as a sales assistant and office manager. She ran the camera for live shots from the studio and wrote scripts for the Harvest of Harmony parade, giving her the unique challenge of describing 150 different bands.

Williams is a Grand Island Senior High School graduate who has been involved in the Prairie Pioneers Quilt Guild, P.E.O., Habitat for Humanity, St. Mary’s Cathedral and Middletown Heritage Association. She is a former Girl Scout leader and recruiter, a current Nebraska State Fair volunteer and Leadership Tomorrow graduate.

Along with her husband, Don, she served on Creighton University’s Parents Council for six years. The couple has two daughters: Jennifer Green of Lincoln and Valerie Valdiviez of Ft. Collins, Colo. They also have four grandchildren.

Six employees have received the TRiO/SSS Support Award for going the extra mile in helping students in the program succeed during the 2018-19 academic year. They are:

Ryan Coffey has been promoted from part-time to full-time groundskeeper and maintenance technician.

Chyrel Remmers has retired as an English instructor. She joined the CCC staff in 2010.

Wendy Leiding has been promoted from part-time to full-time nursing assistant and medication aide trainer.

Jason Davis has resigned as associate dean of students.

Carol Boyle has been promoted from part-time to full-time program coordinator and learning center manager.