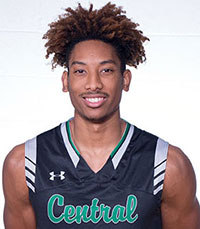 Talley started 18 games for the Raiders in 2018-19 and nearly averaged a double-double with 13.2 points and 9.9 rebounds per game. He led the Raiders in blocks per game at 2.3 and field goal shooting at 57 percent.

“This is a great honor for Latrell,” said CCC head coach Jerry Drymon. “He was an outstanding player and student for us. Latrell is a great ambassador for our program and has been a pleasure to coach. He came in with not much recruiting attention and worked hard to become the player he is today.”

Talley was named to the Nebraska Community College Athletic Conference All-Conference Team following the 2018-19 season. He also earned NJCAA National Player of the Week honors in December for recording a double-double in three games, averaging 14.3 points and 18.3 rebounds. Talley’s best performance of that week was against Doane JV as he scored 22 points and hauled in 21 rebounds.

A sophomore from Palm Bay, Fla., Talley will soon be returning to his home state to continue playing college basketball.

“Latrell is leaving CCC as a graduate and on a full scholarship to Palm Beach Atlantic University,” said Drymon. “That is what we hope happens for all of our athletes.”