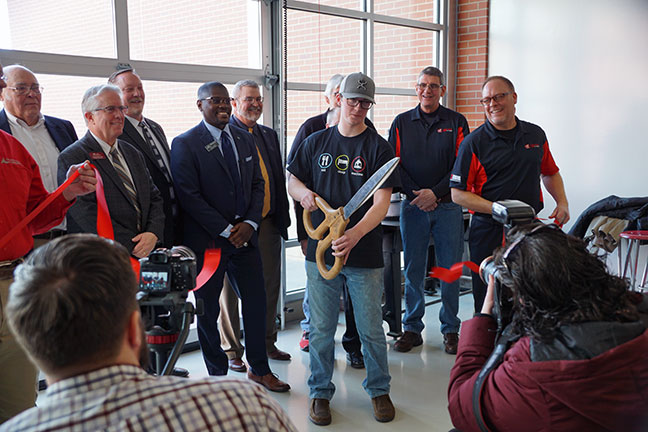 Ribbon-cutting ceremonies were held Feb. 5 at the advanced manufacturing design technology (AMDT) wing of the Hamilton Building on the Hastings Campus. The new AMDT wing is the first phase of a two-year, $10.3 million project. The second phase is the remodeling of the welding technology area, which is underway.

It was standing room only as some 150 guests joined in. Among those taking part in the ceremony and touring the facility were area high school students and business and industry representatives.

“It was really awesome,” said CCC-Hastings President Dr. Jerry Wallace. “Business and industry was very much a part of today and getting the building built. A couple of them recruited our students so we’re really happy that we have wonderful partnerships and that a lot of people came out to celebrate.”

Before the project got underway, AMDT and welding technology shared a 15,000-square-foot room to house all of the equipment for both programs. In fact, space was so limited that some students had to keep their projects outside. Now AMDT has its own 17,000-square-foot area to house all of the existing machines, along with eight new ones. Throw in additional classroom and meeting space and it is a sight to behold.

“It was nice to see the looks on people’s faces when they walked in,” said AMDT instructor Troy Davis. “They were all amazed, just like we were.”

Davis is also quick to point out that with the new facility, the AMDT program is state-of-the-art.

“We’ve updated the existing technology that we have to better rival what industry has and the students are loving it,” said Davis. “With a place like this, it’s not hard to get them hooked.”