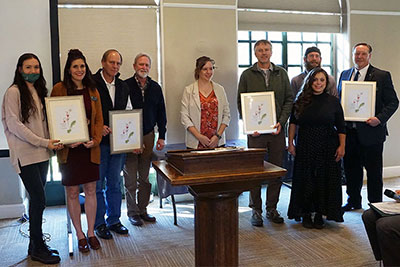 CCC environmental sustainability director Ben Newton along with students and staff from the Columbus, Grand Island and Hastings campuses and the Ord Center accepted the award on Nov. 5.

At the Grand Island Campus, planting started in 2017 with a pollinator garden and has continued to expand. The garden is maintained by students and interns without the use of chemicals and has been a showcase for the annual pollinator and groundwater festival. Newton along with Kazia Marquez and Joseph Black were instrumental to its success.

The Hastings Campus began with a plant grant in 2020 and added a Bloom Box planting in 2021. Plants were selected to benefit the adjacent culinary program vegetable and Pawnee corn garden by attracting pollinating insects. It is also chemical-free and is maintained by the Students 4 Sustainability club and interns including Madison Hajek and William Gordon.

In Columbus, a large pollinator garden was planted by facilities and sustainability staff in 2017. Facilities management director Kim Garretson and Dr. Gotschall, Columbus Campus president at the time, were instrumental in supporting the project. The garden serves as a research site for a mushroom bee hotel trial planned by a student and funded by UNL Extension and the National Science Foundation.

In Ord, CCC regional director Dr. Crystal Ramm worked with the City of Ord to approve and prepare for a garden located near the hike and bike trail. Dr. Ramm maintains the garden and Students 4 Sustainability have installed three separate Bloom Box gardens as they keep expanding and adding more native plants.