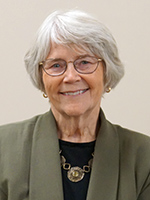 CCC Board of Governors member Diane Keller has been named as the recipient of 2022 Western Region Trustee Leadership Award by the Association of Community Colleges Trustees (ACCT). The award recognizes community college leaders for meeting the needs of their communities.

Keller will receive the award during the 53rd annual ACCT Leadership Congress in New York City in October. As a regional award recipient, she is one of five nominees for the ACCT’s prestigious M. Dale Ensign Trustee Leadership Award, which will also be presented at the leadership congress.

“It has been an honor to work for all community college students in Nebraska, but especially at CCC to make Nebraska the best place to live and do business,” said Keller.

Keller has been a member of the CCC Board of Governors since 2000 and served in numerous leadership positions, including two terms as chair. She recently retired following a 50-year career with Aurora-based Memorial Community Health, Inc., the final 18 years as CEO. That experience was instrumental in advocating at the local, state and national level for the competence of two-year registered nursing programs.

“Diane Keller has been an outstanding board member and very knowledgeable about so many program areas including nursing, allied health, agriculture and business,” said CCC President Dr. Matt Gotschall. “She has dedicated hundreds of hours to not only making CCC better, but the entire Nebraska community college system.”

“I was pleased and proud to nominate Diane for this well-deserved award,” said CCC Board of Governors Chair John Novotny. “She exemplifies what the award is all about. Diane has broken ground and paved paths for women and all that do public service and does it from the heart. I am so happy for her and all her accomplishments”.

Keller’s ACCT recognition follows her receiving the Nebraska Community College Association (NCCA) Governors Award in 2021. The NCCA Governors Award is given to a college board member for outstanding leadership, both at the institution and in the community, and support of two-year colleges. She twice served as president and vice president of the NCCA Board and one term each as secretary and treasurer. Each term required involvement in the NCCA executive committee and full board meetings.

Keller lives a farm near Harvard with her husband, Keith. They have two grown children.