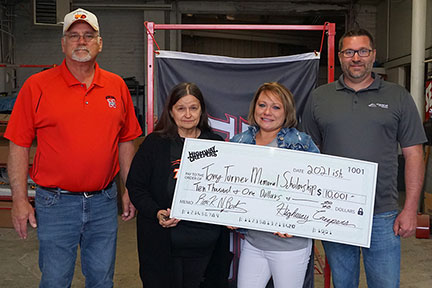 The Highway Creepers Car Club of Kearney has donated $10,001 dollars to the Tony Turner Memorial Scholarship, which will generate funds for students in the auto body technology program. Turner was the owner of Turner Body Shop, located in Kearney and Holdrege, until his death in 2019.

The money was raised at the Highway Creepers’ annual car show in April, which included a live and silent auction, a 50/50 raffle and a fill-the-bucket campaign. Highway Creepers President Matt Mattson also credited the Bummers Car Club of Sioux City, Iowa, and the Omaha-based Headliners Car Club for providing auction items.

“This is the biggest donation we have ever given,” said Mattson. “As long as the Tony Turner Scholarship is going on, we will donate to it.”

While Turner was not a member of the Highway Creepers, Mattson said Turner was a friend of the club and many of its members.

“The guy would bend over backwards for anybody,” said Mattson. He was always smiling, even when he was mad, he still smiled. But you never really saw him mad a lot.”

In accepting the donation, the Turner family expressed appreciation that Tony’s love for helping others will continue well into the future.

“He was always mentoring and never hesitated to help anybody,” said Ashley Turner (pictured second from right), Tony’s widow. “These funds will go to worthy, dedicated students who are struggling financially to follow their dreams.”

A third-generation family-owned business; Turner Body Shop has had multiple CCC student interns and alumni throughout the years.

“It’s not just fixing the cars,” said Turner. “It’s ordering parts, it’s working in the office, it’s writing estimates. There are a lot of different areas that the students can learn about.”

The Turner family also expressed thanks to James Rodis, vice president of the Nebraska Autobody Association (NABA), who provided scholarship funding in honor of Tony’s involvement with NABA. The family also recognized several other individuals and businesses for donating to the scholarship.

Mike Hoskins (pictured right), CCC auto body technology instructor, said the endowed scholarship comes at a critical time as more than half of the students in the program come from lower-income families. He said some students cannot afford the necessary equipment or to pay for fuel as some come from as far away as Lexington to attend classes.

“This donation is going to give scholarships to students for years to come,” said Hoskins. “Our program has never had anything like this.”

“The Turner family is part of our advisory board and is heavily involved in the Nebraska Auto Body Association, which makes suggestions for what the industry needs,” said Hoskins. “Our industry has really reached out to us to figure out how to get technicians into their jobs.”