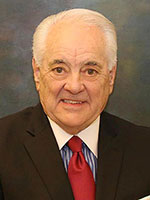 It is with great sadness that Central Community College announces the death of Board of Governors member David Stubbs, who died on Wednesday, Feb. 5.

“Central Community College is so blessed to have had such an outstanding public servant looking out for the best interests of students and our communities,” said CCC President Dr. Matt Gotschall.

“Speaking for the Board of Governors, we are all going to miss David’s insights and his guidance in helping direct Central Community College,” said Board Chair Sam Cowan.

Active in the community, Stubbs was a member of the Kearney Area Chamber of Commerce, the National Federation of Independent Business and the Kearney Airport Authority.

Funeral services were held on Monday, Feb. 10, in Ravenna.