Evelyn Binder of Clay Center is working toward an associate of applied science degree in human services at the Hastings Campus where she is a member of the PTK Beta Alpha Delta chapter. She also is involved with local church activities and the Harvard Cleft Club, which is the parent organization for the fine arts program at Harvard Public Schools.

Sydnie Budde of Cairo is graduating this spring from the Grand Island Campus with an associate of arts degree. She is a member of the PTK Alpha Tau Tau chapter and has been named to the President’s Honor List for achieving a perfect 4.0 GPA. She plans to transfer to the University of Nebraska Medical Center to work toward a bachelor’s degree in nursing.

Mallory Gotschall of Columbus graduated from the Columbus Campus in December 2019 with associate of science and associate of arts degrees. While at CCC, she was a member of the PTK Chi Sigma chapter and the National Society of Leadership and Success. She also served as secretary of the Judicial Board, earned NJCAA 1st Team All-Academic honors as a member of the volleyball team and was named to the President’s Honor List. She is working toward an occupational therapy degree at the College of St. Mary in Omaha.

Taryn Patterson of Loomis is graduating with an associate of arts degree from the Hastings Campus this spring. She is a member of the PTK Beta Alpha Delta chapter and TRiO Student Success Club and has been named to the Dean’s Honor List. She plans to transfer to the University of Nebraska-Kearney to earn a bachelor’s degree in early childhood education and special education.

The chapter received a Five-Star Chapter Award in recognition of its engagement at the campus, regional and international levels and a second place in the College Project category for placing in the top 25 percent of projects submitted in the category.

Chi Sigma advisers Staci Prellwitz and Kimberly Saum, both of Columbus, received the Horizon Adviser Award for making significant contributions to the chapter, including serving as its advocate on campus and encouraging members to be involved at all levels of Phi Theta Kappa.

The chapter received a Five-Star Chapter Award and a fifth-place Honors In Action Award. 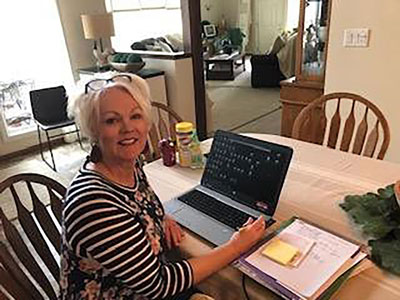 Beginning April 20, Central Community College began naming a winner of the CCC Home Office of the Week and will continue doing so until employees return to working onsite. The winners receive a Home Bound Hero award/gift and are spotlighted in an email to all CCC employees and on the human resources’ Facebook page. The first winner was Dani Schwinn, college-wide instructional design and technology consultant, whose office (above) features a new desk she built herself. The second-week winner was (left) Carol Kucera, executive assistant to Hastings Campus President Dr. Jerry Wallace, who has staked claim to the kitchen table. Their suggestions for working at home included sitting by a window for natural light, keeping the workspace organized, sticking with a regular routine, setting rules with family members and finding a way to “clock out” at the end of the day.

Central Community College will receive nearly $1.9 million from the U.S. Department of Education to assist with COVID-related expenses.

The allocation is part of the Coronavirus Aid, Relief and Economic Securities Act (CARES). The measure stipulates that half of the federal dollars, about $950,000, be directed as emergency cash grants for students impacted by COVID-19. Student expenses could include lost wages; housing, health care and child care costs; and computers or other necessary technologies for remote instruction of college courses.

“We are working to get the appropriate student grant applications completed, using as much existing information as we have, while providing opportunities for students to apply as early as April 22,” said CCC President Dr. Matt Gotschall. “These funds will not only be available for current students, but those looking to begin or complete coursework this summer and fall.”

Students in noncredit courses are not eligible for these funds.

The remaining funds will be designated to cover additional COVID-related costs such as lost revenues from training cancellations, technology upgrades, partial housing refunds, additional cleaning supplies and easing the impact of furloughs or unemployment of part-time and full-time employees.

Central Community College-Columbus is accepting applications from high school seniors and current CCC students with an eye on a career in a STEM (science, technology, engineering, mathematics) field.

CCC-Columbus is home to Project GPS (Growing Pathways to STEM), a scholarship program sponsored by the National Science Foundation (NSF) that targets high-achieving students with financial needs and who represent underserved populations in STEM fields.

Thanks to a five-year, $648,844 NSF grant, Project GPS scholars receive two years of financial support that meets all their unmet financial needs (according to the Free Application for Federal Student Aid or FAFSA) to attend CCC.

“This information is important in helping us select the best applicants,” Heinisch said. “Before we decide to sign a scholar, we meet with them to discuss our program and their academic goals to make sure it is a good fit.” 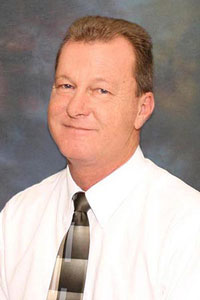 He grew up in Sutton where he graduated from Sutton High School. Following his graduation, he moved to Hastings where he attended and graduated from Central Community College. He later received his bachelor’s degree from the University of Nebraska-Kearney.

He married Kathleen “Kathy” Keasling on May 30, 1981, in Harvard. They made their home in Hastings where they raised their family.

He was employed as a computer programmer at the Meat Animal Research Center for five years.

In 1980, he joined the CCC staff as a data processing instructor at the Hastings Campus. He transferred to the Grand Island Campus in 1996 where he worked until his retirement as an information technology instructor in 2018.

Survivors include his wife, Kathy, a mathematics instructor at the Grand Island Campus; his children, Daniel Boehler of Broken Arrow, Okla., Kevin Boehler of Omaha, and Kourtney Boehler of Kansas City, Mo.; and his brothers, Dennis Boehler and Donald Boehler, both of Sutton; and a grandson.

He was preceded in death by his parents.

Private condolences may be sent to the family at www.lbvfh.com.

Joni Ransom, chief of staff, has received a first-place award from the Nebraska Press Women for editing and design of the Spring 2019 Community Connection magazine.

Campus President Kathy Fuchser was one of five new business representatives who recently joined the Columbus Area Chamber of Commerce Board of Directors.

She has served as both co-chair of SCORE Nebraska Route 81 and assistant district director of Nebraska since May 2019.

Lux became familiar with SCORE in 1994 while working with entrepreneurs at the Columbus Campus. Since then, she has worked to create connections between SCORE and CCC, economic development agencies and chambers of commerce.

“Her involvement with SCORE has led to many opportunities to network in her community,” the article stated, “which has helped SCORE become a critical resource for entrepreneurs in the area.”

Wanda Cloet, dental hygiene program director, has been elected to a senior leadership position in the American Dental Education Association. The position is 2020-21 chair of the Council of Allied Dental Program Directors.

Gayle Engel has been promoted from part-time groundskeeper to full-time shipping and receiving clerk and building maintenance technician.

Adam Daake has joined the staff as an advanced manufacturing and design technology instructor. He will start part-time on May 1 and go full-time on Aug. 1.

Chemistry instructor Yunteng He has had a paper, “Constructive Error Climate: A Classroom Assessment Technique in Science Classes,” in the March/April 2020 issue of The Journal of College Science Teaching, a peer-reviewed publication.

The article describes the use of errors as integral elements of the learning process in CCC classrooms.

Vice Chair Sandra Borden of Gibbon has been named a recipient of a 30th annual Freedom Award in recognition of her volunteerism in the medical field.

Recipients were selected from nominations from Kearney Hub readers, and they each make the world a better place by their hard work and selfless commitment.