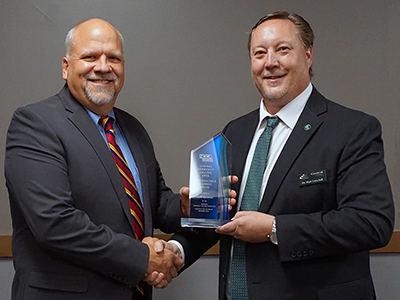 Barwick (pictured left) is a 1990 graduate of what was then known as the machine tool technology program at CCC-Hastings. He then worked as a toolmaker for several companies in the tri-cities area, learning the trade and employing available technologies. Barwick gained experience creating metal stamping dies and plastic injection molds for parts that are used in everyday life.

In 2003, Barwick was working for a company north of Grand Island that closed shop. He found himself at a crossroads with 23 years of toolmaking experience and a strong desire to take charge of his career. Barwick was encouraged by many of his colleagues and friends to start his own tool shop.

In January 2004, Barwick and three of his former associates opened Drake Tool & Design Inc. in Hastings. With hard work and determination, Drake has grown into a reputable and successful job shop. Some of Barwick’s customers include Toyota, Hornady, Nebraska Aluminum Castings, BUNN coffee makers and many more.

Barwick and his wife, Stephanie, are the parents of three children. 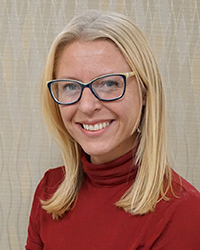 Based at CCC-Columbus, Gillespie is the co-project director of the National Science Foundation-funded scholarship program ‘Growing Pathways to STEM” (Project GPS), which uses a cohort model, undergraduate research experiences and industry relationships to further student success. She established a framework for the research program known as the Bluebird Project, where students helped establish nest-box trails both on campus and in the local community and collected data from the local bluebird population.

During a routine lab session, Gillespie discovered a population of barn swallows exhibiting partial albinism leading to several local and international research collaborations, elements of which she integrates into her classroom and laboratory activities so that students are experiencing real science in real time. She was recently published in a top journal, “Molecular Biology and Evolution,” as part of an international collaboration of researchers studying the mitochondrial genomes of all barn swallow subspecies.

Gillespie has created new collaborations with multiple four-year universities, including the University of Nebraska-Lincoln, University of Nebraska-Kearney, Creighton University, Colorado State University Pueblo and an ongoing international collaboration with California State Polytechnic University, Pomona and researchers in Italy. She wrote and was awarded a Nebraska EPSCoR grant for $5,000 to pay students for their summer research work and helped a student write a public information and education grant through the Nebraska Academy of Sciences, resulting in a $3,000 award and publication in the Nebraska Environmental Trust monthly newsletter.