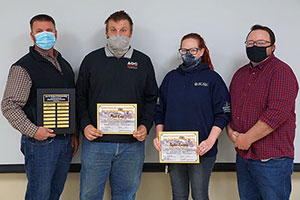 Paul Law (second from left) and Taylor Marie Laveau (second from right), both of Hastings, each received a $1,000 scholarship to assist them financially in their educational pursuits. Presenting the scholarships were Matt McCann (left), program director, and Jason Baker (right), instructor.

Ron and Tammy DeBord established the scholarship in honor of Ron’s father, Jim, who worked in the heavy equipment field for more than three decades.

“It’s good to know that there are people who would do something to help me,” said Law.

“It’s feels amazing,” said Laveau, who previously earned a psychology degree from the University of Nebraska-Kearney. “I can’t thank (the DeBord family) enough.”

Both Law and Laveau will graduate in May. Law plans to stay in Hastings and seek employment in the area. Laveau is looking to move to O’Neill after graduation and pursue a career in heavy equipment and work outdoors like her family members.

“It’s the kind of work that you and other people can see that you have completed and it’s really satisfying,” said Leveau.

Two scholarships are given each year to students in the heavy equipment operator technician program.