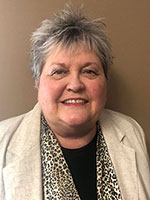 She earned a two-year diploma in dental assisting in 1976, becoming the first member of her family to graduate from a postsecondary school.

Welke has been employed by Landgren Family Dental for more than 35 years. She worked for many years as a chairside assistant to Dr. George Landgren before being promoted to running the front desk and training incoming dental assistants. When Dr. David Landgren joined his father in his practice, she was Carol was promoted to office manager. She had planned to retire in March, but COVID-19 led Landgren and Uden Family Dentistry to ask her to stay longer because of her experience and expertise in the office.