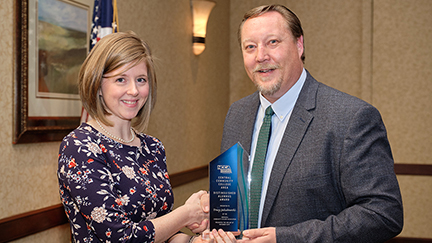 She was one of five individuals to receive the alumni award Nov. 3 at the NCCA annual conference in Lincoln. The other four recipients graduated from Mid-Plains, Northeast, Southeast and Western Nebraska community colleges.

Following her graduation from Central Community College-Grand Island in 2007, she went on to earn a bachelor’s degree in education from the University of Nebraska at Kearney in 2009 and a master’s degree in curriculum and instruction from Doane College in 2012. She completed her educational administration 7-12 endorsement through UNK this fall.

Jakubowski began her career with Grand Island Public Schools at Walnut Middle School and then was an integration specialist at West Lawn Elementary School before accepting her current position as a history teacher at Grand Island Senior High School.

During her time as a teacher, she has served in many additional capacities, from coaching volleyball and basketball to traveling with students to Washington, D.C. She serves as a team leader for the Academy of Freshman Exploration and a sponsor for GISH students attending the Capitol Forum on America’s Future with Humanities Nebraska in Lincoln. She is a member of the district’s Teacher Leader Coalition, the American History Task Force for Curriculum Design, and the Nebraska Department of Education’s Social Studies standards revision team.

Jakubowski’s dedication to bettering history education led to her being selected to attend the 2018 Belfer National Conference at the United States Holocaust Memorial Museum in Washington, D.C. She has also attended conferences in Nashville and Anaheim to help with the transition of GISH into a career academy school as a teacher leader.

In 2019, she received the CCC-Grand Island Outstanding Alumni Award and was named Grand Island Senior High Teacher of the Year.

She and her husband, Ron, have a daughter, Julia.