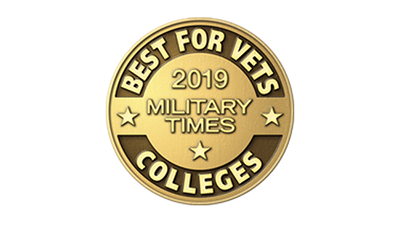 For the sixth straight year, the Veterans and Military Resource Center (VMRC) at Central Community College is No. 1 on Military Times Best: Colleges 2019 rankings.

CCC finished ahead of community colleges in Michigan, Texas, Washington, and Virginia.

“Being recognized by Military Times as one of the best institutions for military-affiliated students demonstrates CCC’s commitment and dedication to veterans, service members and their families,” said Travis Karr, CCC veterans and military services director. “Student veterans face unique challenges as they readjust to civilian life and we are exceptionally proud that CCC has multiple centers and services available to empower them through the transition. The VMRC is wholeheartedly committed to facilitating the educational success of all our veterans and services members at CCC and beyond.”

“Military Times’ Best for Vets designation is trusted throughout the veteran community as the mark of excellence for schools and other organizations that work with veterans, service members and military families,” said George Altman, Military Times editor in charge of the rankings. “Fewer than half of the roughly 500 colleges and universities that competed for the recognition earned the right to call themselves Best for Vets in 2019. Their efforts should be commended.”

CCC established the VMRC in 2011 at the Columbus, Grand Island and Hastings campuses. A fourth VMRC was opened at the Kearney Center in 2017.

“First place ranking in the entire nation is not easy to obtain,” said CCC President Dr. Matt Gotschall. “I am proud of our veterans resource staff and CCC faculty, but most proud of our veteran students who have continued to demonstrate leadership and dedication toward earning a degree at Central Community College.”