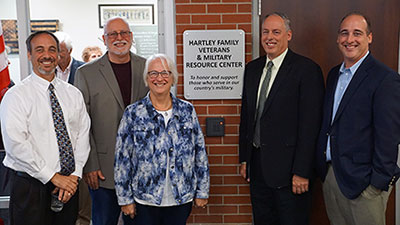 A commemorative plaque in the VMRC includes the names of Alan, his father and sons, their respective branches of service and a brief detail of their experience.

Hartley, who was an instructor and staff member at CCC for more than four decades, served for 12 years in the U.S. Army Reserve. Called to active duty during Operation Desert Storm in the Persian Gulf War, he served for six months with the 295th Ordinance Company in Germany.

The VMRC serves veterans and military service members throughout their studies at CCC and acts as a liaison with the Veterans Administration for students claiming benefits. In recent years, the VMRC has been recognized nationally and has earned the top ranking among two-year colleges on the Military Times’ Best Colleges survey for five consecutive years.

CCC established the VMRC in 2011 at the Columbus, Grand Island and Hastings campuses. A fourth VMRC was opened at the Kearney Center in 2017.