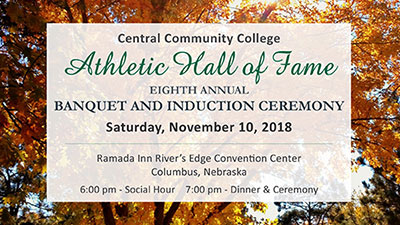 Ahern led the 2005 CCC volleyball team to a top eight finish at the National Junior College Athletic Association (NJCAA) tournament. She was named to the all-tournament team and garnered Second Team All-America honors.

Dolezal served as a student manager and statistician for the CCC men’s basketball team from 1981 to 1983. He had positive influence on the 1983 squad, which finished in second place at the National Little College Athletic Association tournament.

Przymus served as the associate dean of students at CCC-Columbus from 2006 to 2018. She oversaw athletics during that time and was instrumental in the addition of men’s golf, men’s soccer, softball, women’s basketball and the Raider Rex mascot.

Zierke was a standout member of the CCC men’s basketball team from 1987 to 1989. Averaging 19 points and eight rebounds per game, he earned All-Region IX honors.

The 2005 Raiders won the Region IX tournament and finished in the top eight at the NJCAA national tournament. Multiple players earned post-season honors.

Hy-Vee has provided steadfast support for CCC athletics for several years, which has been instrumental in the success of all programs. The Raider Booster Club, Raider Night and Go-Play Multi-Sports Clinics are just some of the things that Hy-Vee has graciously sponsored throughout the years.

If you would like to attend the induction ceremonies, please RSVP to Sara Rood in the CCC athletic department no later than Monday, Nov. 5, at noon. Her direct line is 402-562-1254 or you can send her an e-mail at sararood@cccneb.edu. Tickets are $25 per person.