A reception honoring retired CCC executive vice president Dr. Deb Brennan was held on May 30. Brennan, who served CCC for 33 years, received numerous handshakes and hugs along with multiple gifts from her colleagues and friends. 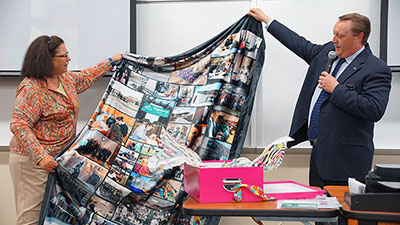 During a short program, CCC President Dr. Matt Gotschall presented Brennan with a special blanket made from several photos of her that were taken throughout her career at the college. Brennan spoke to the gathering and shed a few tears as she particularly thanked her mother, Clarice Heeg, for helping her achieve her goals and aspirations. An announcement of the establishment of a scholarship in Brennan’s name was also made.

Brennan joined CCC in 1985 as an instructor in the hotel, motel and restaurant management program on the Hastings Campus. She was certified by the American Culinary Federation as a culinary educator and executive chef and is credited with starting the culinary arts program. In 1990, Brennan received the Nebraska Chef Educator of the Year award.

After 12 years as instructor, Brennan began a five-year stint as the associate dean of business and health at CCC-Hastings before being named dean of health sciences. In 2008, she became executive vice president when Dr. Greg Smith vacated the position upon his appointment as college president.

Brennan and her husband, Bill, have relocated to Florida.