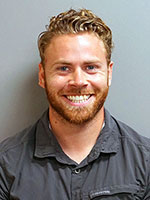 Central Community College athletics is pleased to announce the appointment of Hawken Hanna as head coach of the men’s soccer team. Hanna succeeds Dave Silva, who recently returned to Florida following two years at the helm of CCC soccer.

Hanna comes to CCC with a wealth of soccer coaching experience both at the collegiate and high school level. Most recently, he served as the interim head coach of the women’s program at Trinidad State Junior College in Colorado. Prior to that, Hanna served as an assistant coach for both the men’s and women’s soccer teams at Trinidad. At the high school level, he was the head girls soccer coach at Kent City High School and the boys head coach at Greenville High School, both in Michigan. Hanna also coached the girls' teams at Alamosa and Poudre High Schools in Colorado.

“I am privileged to be the head men’s soccer coach here at Central Community College,” said Hanna. “I look forward to working with our student-athletes to help them become the best version of themselves on and off the field. I also look forward to collaborating with the greater campus community to continue to make Central a great place to be.”

Hanna was a four-year starter and three-year captain at Adams State University in Alamosa, Colorado. As a senior, he was named All-Rocky Mountain Athletic Conference Third Team after starting 16 games for the Grizzlies and posting a shot on goal percentage of .83 percent. Hanna was also named as an NCAA Division II Scholar Athlete.

“We are really excited to have Hawken on board as our men’s soccer coach,” said CCC athletics director Jack Gutierrez. “Coach Silva had a good nucleus of returning players and an excellent recruiting class coming in as freshmen. Hawken has a full squad to start his career at Central and we look forward to the 2018 season. He will work as an advocate for all of our athletes.”

In 2014, Hanna graduated with a sociology degree with an emphasis in social welfare from Adams State. He is currently pursuing a master of arts in sociology from Colorado State University.

Hanna began his duties at CCC on July 2. He and his wife Margaret reside in Columbus.