Central Community College has received nearly $28,000 to cover the costs of last year’s designing and planting of pollinator gardens on the Columbus and Grand Island campuses.

The Greener Towns and Community as Habitat program provided $18,500 in funding for the Grand Island Campus while the Columbus Campus received $9,300. The two projects were among 50 in Nebraska to receive funding, which is aimed at improving green infrastructure for pollinator habitat; managing storm water; or accomplishing other economic, environmental, aesthetic and social goals. 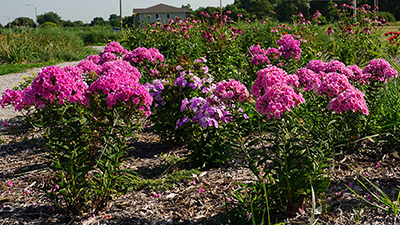 The 6,000-square-foot pollinator garden at CCC-Grand Island was designed by Big Muddy Workshop and installed in October 2017 by Tilley’s Landscaping. The garden builds upon CCC’s beekeeping program and diverse plants were selected to survive the wind, cold, and drought to provide food and shelter resources for pollinators in three seasons. The plantings include native Nebraska deciduous shrubs, perennials and groundcovers, grasses and sedges.

“CCC-Grand Island had a diverse green team composed of administrators, staff, faculty, and students from many different departments having a common goal, which made the project successful,” said Ben Newton, CCC director of environmental sustainability. “After completion of the project, we realized much more education is needed on the importance of pollinators and their habitat. Pollinator insects contribute to one-third of the food we eat and include bees, moths, butterflies and beetles. The new garden also offers a space to engage in outdoor learning with a diversity of pollinators and plants.”

CCC-Grand Island will host a pollinator festival on Saturday, Oct. 13. Details will be announced at a later date.

The pollinator garden at CCC-Columbus is 7,200-square-feet and contains some 1,500 plants, grasses and shrubs specifically chosen because they attract pollinating insects. The garden was planted in April 2017 by CCC employees and Platte County Extension Office master gardeners.

“We plan to utilize the garden as a learning lab for community education, science and ag education, along with other partnerships,” said Kim Garretson, CCC-Columbus facilities management director, who oversees the pollinator garden. “The area was designed so we can continue to expand and add more features to attract pollinators and interest for students and the community. The campus added multiple beehives this past spring and has plans for several more projects by fall to enhance the garden.”

For more information about this or future funding assistance, go to http://plantnebraska.org/community-landscapes/project-funding/greener-towns.html or contact Rachel Anderson at randerson@unl.edu.