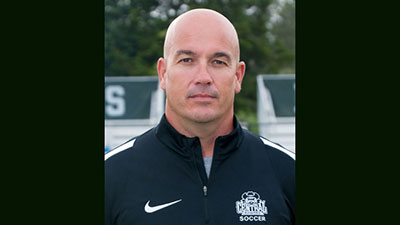 Central Community College athletics is pleased to announce the appointment of Jamie Bennett as the head coach of the women’s soccer team. This follows CCC’s announcement last month that it would be adding women’s soccer and fielding a team in fall 2019.

Bennett brings 12 years of coaching experience to CCC having led teams at the college, high school and club levels. Bennett served as an assistant coach for the CCC men’s soccer team for the 2017 season. For seven years, he skippered soccer teams at Columbus High School. He spent five years as the head coach for the boys team and two years at the helm of the girls squad. Bennett has also led various club teams in the Columbus area.

“I am honored and humbled to be named as the first women’s soccer coach at CCC,” said Bennett. “It’s a great opportunity and I’m just really excited to have been chosen.”

“We are happy to have Jamie as part of our coaching staff,” said CCC athletic director Jack Gutierrez. “He has great soccer coaching contacts within the state of Nebraska and is well-connected with our local high school coaches.”

Bennett is currently employed as a sales manager at Columbus-based Pioneer Transfer. He and his wife Julie have been married for 19 years and they are the parents of three children.