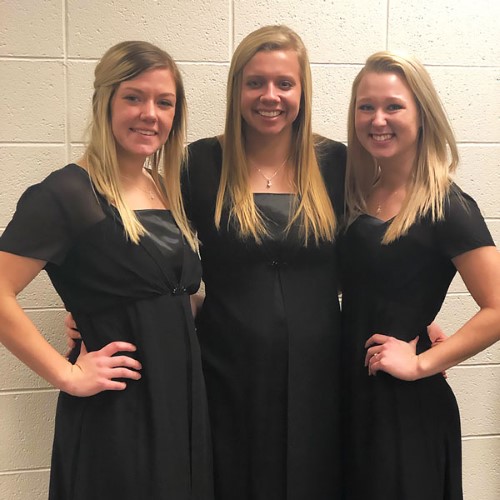 Central Community College students bring so many talents to each campus or center. When those talents are utilized by multiple student organizations, it makes it even better.

Such is the case with the CCC volleyball team and Spectrum, the auditioned music ensemble, at the Columbus Campus. Three volleyball players – freshmen Katelynn Halstead (right) and Ali Jones (left) and sophomore Jordee Korte (center) – are also members of Spectrum.

It is not uncommon for some coaches to get nervous when their team members are members of other high-profile organizations and vice versa. However, music instructor and Spectrum director Jeff Kitson is not one of them.

“We want everybody,” said Kitson. “We want athletes. We want singers. We want painters. If you want to sing, we have a place for you.”

“I know Jeff Kitson and I both set high standards for the programs we represent,” said Young. “So, it really makes sense for us to work together to benefit our students and to allow them to enjoy both areas which they love.”

One of the concerns that some may have is the occasional scheduling conflict. Such was the case at the November 2018 CCC Board of Governors meeting, which was held at the Columbus Campus. As customary, Spectrum performed for the Board at around noon. Normally, CCC’s volleyball matches are held in the evening. However, the Raiders were set to host a tri-match starting at 1 p.m. and warmups begin an hour prior. Nevertheless, both sides worked together to make it happen.

“They actually had their uniforms on underneath their dresses,” said Kitson. “We were talking about getting them some Velcro so they could just break it off and run to the game. But, Mary was very helpful with letting them do that.”

Leadership, teamwork and discipline are some of the skills necessary to be successful in volleyball and Spectrum and Kitson points out that each of these young ladies exhibit strong leadership.

Kitson describes Korte as a very good leader for Spectrum, even though her leadership style is a bit different in that she is a quiet leader.

“We also need silent leaders,” said Kitson. “Ones who just do and lead by example.”

Kitson describes Jones as a very sweet soprano who has grown a lot through hard work.

“She was a little shy and found her voice and found her leadership skills,” said Kitson. “She’s actually our section leader now.”

“She is very energetic, very kind and such a great asset to our program,” said Kitson.

Young is pleased at how the arrangement has worked out, not only for her team and for Spectrum, but also for the college as a whole.

“I’m amazed at the talent our volleyball student-athletes have beyond volleyball,” said Young. “I think it speaks volumes about the quality of students we are attracting to Central Community College.”